Robert Burns’s The Twa Dogs is a tale of those who have and those who have not.  Artist Sally Matthews has brought the story of Caesar and Luath to life in sculpture for the Robert Burns Birthplace Museum in Aryshire, Scotland.

Last fall, we introduced our community to three new and in-progress contemporary sculptures at National Trust for Scotland properties in the blog, Love of Heritage Shines through Contemporary Art. One of the sculptures, The Twa Dogs, based on the Robert Burns poem by the same name, is now on its way to completion! Here, Sally Matthews weighs in on the creation of the sculptures, offering video from her studio and her creative process for bringing the beloved pets to life. Scroll to the bottom of the article to view the video.

'The Twa Dogs' sculpture in progress in the studio.

About Caesar and Luath

Burns had a beloved border collie named Luath, which he chose to immortalize in ‘The Twa Dogs’. Luath was named after Cuchullin’s hunting dog in Ossian’s epic poem ‘Fingal’. In Burns’s poem, Luath has a conversation with a Newfoundland, Caesar, in which they discuss their owners. A social satire on wealth, poverty and class, Burns uses Caesar and Luath to pointedly examine society’s inequalities.

‘Twas in that place o’ Scotland’s isle,
That bears the name o’ auld King Coil,
Upon a bonie day in June,
When wearin’ thro’ the afternoon,
Twa dogs, that were na thrang at hame,
Forgather’d ance upon a time.

Read the full poem and an interesting analysis here. Loyal Luath can also be seen at Burns’s side in Boston’s statue of the Bard, recently relocated to the Back Bay Fens.

Sally Matthews in the Studio

Zuleika Brett, Major Gifts Manager at NTS, asked Sally to tell us a little about her thoughts on the commission, her research, sources of inspiration and method for creating the sculptures.

Sally Matthews on The Twa Dogs: I was really excited to be asked to make the Twa Dogs for the Poet’s Path; I love making dogs. Going up to the Burns Museum was really interesting. Burns was a poet inspired by the land, as I am by animals. His sympathy for a mouse being disturbed by the plough resonated with my thoughts as an artist who tries to make animals that people see as individual beings.

I didn’t really know Burns’s poetry well before being asked to do the commission, so it has been inspiring to research both the poetry and the border collie and Newfoundland dogs of about 1785. I have tried to make the dogs as they would have been then.

Through looking at photographs and different writing about the dogs, I discovered the Newfoundlands are a difficult dog to pin down, as vague as the lines “But whalpit some place far abroad, whare sailors gang to fish for cod”. They were a larger-than-average working dog from Newfoundland, very hardy. They lived outdoors with thick coats and had webbed feet because they were in the water so much. They were used to pull carts and help the fishing community. As they became popular here, several writers owned or used a Newfoundland in their work – J M Barrie owned one called Luath (who became Nana in Peter Pan) and Byron owned one called Boatswain. The black and white ones were called Landseer Newfoundlands after Landseer painted them, including one in his painting that depicted Burns’s “The Twa Dogs”.

I found a photograph of Burns’s great-granddaughter outside his birthplace cottage. It’s not hard to imagine Burns standing there with his beloved border collie. He described Luath as a “gash an faithfu tyke”. I have known a lot of collies in my time and drew on my knowledge of all of them to make Luath.

Before I make a sculpture, I do a lot of drawings of animals so that when I make the sculpture it can make itself, as the knowledge is in my head. It was more difficult with this commission as the dogs had to be of a certain type and in a certain position. I had visited the Poet’s Path and chosen the site of an existing bench, as I thought it would be good if people could stop and sit with the dogs for a while and join in the “conversation” rather than just viewing them as a sculpture.

Caesar the gentleman’s dog is going to be sat on the bench looking down at Luath, even though “nae pride had he”. He has a brass collar with a lock and his name engraved on it. Luath is on the ground beneath him, looking keen and faithful, and a life-size bum-clock beetle will be on the bench between them.

I rigged up a bench in the studio and made armatures for the dogs out of metal bar and chicken wire. The dogs are made from plaster, hay and wood. The collars are made out of leather and plastic with a staple and real padlock for Caesar to look like brass.

“I know I have nearly finished a sculpture when I start talking to it when I leave the studio.”

They are now at the Castle Fine Arts foundry waiting for a mould to be made from them. An exact wax dog is made from the mould and then I will work on the waxes to make sure everything is correct and perhaps add a few bits of grass or leaf that will burn out with the wax. The wax dogs will be coated in a ceramic and then the wax will be burned out before the bronze is finally poured into the ceramic moulds. I leave all the technical work to the foundry.

You can see them pouring a bronze on my Facebook page: Sally Matthews – Animal Sculpture. I will also put up images of the Twa Dogs going through some of the process. The foundry are casting the bum-clock beetle that I am in the process of making out of wax, so they can cast it without having to make a mould to turn it into wax. The 3m bench will be fabricated by the foundry from bronze sheet.

The foundry has had to close for the moment because of the virus but I am lucky enough to keep working in my studio on things like the beetle.

A Gift in Gratitude

The Twa Dogs sculpture was commissioned by the National Trust for Scotland to honor Helen Sayles, as her term as Chair of the NTS Foundation USA came to an end. Many friends came together with the National Trust for Scotland Foundation USA to recognize and honor Helen’s huge contribution to the Foundation and to Scotland’s heritage. Being from Ayrshire, Robert Burns Birthplace Museum and Burns Cottage are properties particularly close to Helen’s heart, and to which she and her husband DuWayne have made considerable contributions over the years.

Learn more about how you can support Scottish heritage at properties like the Robert Burns Birthplace Museum. 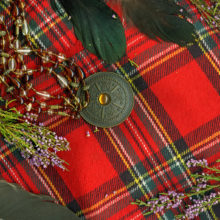 Guest writer John King Bellassai on remembering and celebrating the many [...]