The National Trust for Scotland is responsible for the conservation and display of thousands of objects from furniture to paintings, pottery and domestic tools. You might be surprised, however, to find that the Trust’s heritage properties are also home to many contemporary art sculptures.

The artworks take inspiration from the heritage and landscape at the location for which they are created – a crocodile that celebrates the creator of Peter Pan, a stag nestled within the forest at Glencoe, and two dogs contemplating their place in the world at Robert Burns Birthplace Museum. Let’s take a closer look at these three new sculptures funded generously by American donors.

In June 2018, we gratefully received a grant from the Osceola Foundation to support the reinstallation of the garden at beloved Scots playwright JM Barrie’s birthplace in Kirriemuir, Scotland. This special place is said to have inspired Barrie’s tale of Peter Pan. As part of the garden rejuvenation, the Trust commissioned a life-sized sculpture of the crocodile, who in the story, infamously swallows the hand of Captain Hook. The crocodile sculpture, Tick-Tock, serves as the centerpiece of the new garden.

The British sculptor James Doran-Webb created Tick-Tock entirely out of driftwood. Dorwan-Webb has worked with driftwood since the 1990’s and his large collection allows him to identify pieces of wood perfectly-shaped to fit the natural form of the animal he is creating, allowing him to inject a sense of organic movement and reality into the creatures he sculpts. Interesting fact: for every kilo of driftwood collected, Doran-Webb plants a new tree on the hills of Cebu, the Philippine island where he now lives and works.

In celebration of JM Barrie’s contribution to Scottish culture the 10-foot-long Tick-Tock now stands proud in the garden of the author’s birthplace and is already drawing the attention of visitors of all ages with its fascinating design and audible ticking sound that comes from within – just like the story! It seems the magic at this important place is spreading rapidly. This summer, the first wedding at JM Barrie’s Birthplace was held as a Peter Pan-inspired couple tied the knot in the birthplace of Neverland.

In the heart of the Highlands at Glencoe stands the Watchful Stag, a 6-and-a-half-foot sculpture carefully constructed using welded steel to imitate soft brush strokes forming the shape of a majestic red deer – a long-standing emblem of the Highland landscape and a favorite of visitors to Glencoe. Set beside a stream and surrounded by birch trees, bluebells and willows, the stag has become a wonderful surprise to the over 200,000 people who visit Glencoe each year as they cross the boardwalk between the two main visitor center buildings.

Andrew Kay, an award-winning wildlife sculptor whose work can be seen worldwide was chosen to design and construct the sculpture. From his studio in the hills of Cumbria, Andrew draws his inspiration from the natural world to create life-sized sculptures using a minimalistic metal structure.

The 'Watchful Stag' sculpture installed at the Glencoe Visitor Center.

Thanks to the generosity of Anthony and Anne MacLaurin, the Watchful Stag has become the centerpiece of the recent refurbishment of the eco-friendly visitor center and is bringing the history, wildlife, and geology of the Glen to life through its creative interpretation.

The sheer grandeur, wide-open space, and peace of the mountains of Glencoe, that is steeped in history, warm our hearts and brings our soul back home.

The Poet’s Path at Robert Burns Birthplace Museum connects Burns Cottage, the humble cottage where the famous poet was born and spent the first years of his life, to the main Museum. There are plenty of wonderful Burns-related artworks to see as you stroll along the pathway. Visitors will enjoy the creative ironwork signage by Timorous Beasties that illustrates scenes from Burns’s ‘Tam o’ Shanter,’ Kenny Hunter’s 6-foot tall (not-so-wee) cast iron Monument to a Mouse inspired by Burns’ poem ‘To a Mouse,’ and sculptor Jake Harvey’s larger-than-life sculpture of a haggis carved from British granite.

'Monument to a Mouse' by Kenny Hunter, a favorite on the Poets Path

A new addition to the sculpture path is currently in progress. Funded by the Trustees of National Trust for Scotland Foundation USA in honor of former NTSUSA Chair Helen Sayles, the new sculpture draws inspiration from ‘The Twa Dogs’ written by Burns in 1786. It is a poem of two dogs, Caesar and Luath, whose owners are of differing social class and together they ponder on the lives which their respective masters live. Artist Sally Matthews was commissioned to create the piece that will be placed around a bench and act as a resting spot for visitors to sit and reflect on the life of Burns and his inspiring work. For the piece, Matthews visually represents the social hierarchy referenced in the poem with one dog placed higher than the other yet holding eye contact between them, as shown in the initial sketch below.

One of the most iconic sculptures in Scotland is Andy Scott’s The Kelpies, two enormous 100-foot high steel horse heads straddling the Forth & Clyde Canal in Falkirk, less than an hour from both Glasgow and Edinburgh.

And of course, be sure to look out for the Watchful Stag at Glencoe and Tick-Tock at JM Barrie’s Birthplace. For updates on The Twa Dogs sculpture reveal at Robert Burns Birthplace Museum and more sign up for our newsletter. Join as a member to receive free access to these sites, and 90+ others across Scotland. 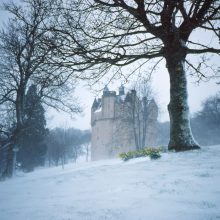 We’ve picked a few of our favorite tales from Trust properties to send shivers down [...]