More than 3,000 people responded to our Culloden 300 consultation last year, which aimed to find out how people wanted the site to look in 2046.

The unique atmosphere, importance as a place of history and remembrance, and the open aspects of Culloden Battlefield must be protected, according to the public.

We are sharing the findings of the National Trust for Scotland’s Culloden 300 consultation in advance of the 275th anniversary of the battle on April 16, 2021. In 2019, around 3,000 people took part online and in person in the consultation which aimed to establish how people wanted the site of the last major battle on British soil to look in 2046, 300 years on from the event that marked the conclusion of Bonnie Prince Charlie’s attempt on the British throne.

Culloden attracts more than 300,000 visitors every year, and the impact of the battle and its aftermath still resonates across Scotland, the United States, and the wider world. However, in recent years the site has come under increasing pressure from piecemeal development.

The Culloden 300 report is the latest action from the National Trust for Scotland, which owns and protects much of this important site, to tackle the issue.

A group of young visitors at Culloden Battlefield

The ‘Living with the Battlefield’ report sets out what people think is so special about Culloden, locally, nationally and internationally and shows the overwhelming support for protecting these qualities. This was highlighted in responses featuring keywords such as ‘peacefulness’, ‘open and empty’, ‘atmospheric’ and ‘unchanged’.

Of the participants, 68% came from Scotland, showing a strong national concern for the future of the battlefield, with a significant response from the rest of the UK (11%) and the wider world (21%). Almost 40% of respondents specifically highlighted the issue of development in the area of the battlefield, with many expressing concerns about its long-term impact.

“This feedback shows how strongly the people of Scotland, the UK and the rest of the world feel about the battlefield. The public say strongly that these special qualities must be protected, now and for future generations. As the conservation charity charged with its protection, we are heartened to hear that so many people support our work to protect one of Scotland’s treasures,” said Raoul Curtis-Machin, Operations Manager at Culloden, in a statement made on July 23, 2020 – the 275th anniversary of Charles Edward Stuart’s arrival in Scotland which ignited the 1745 Jacobite rising.

“Piecemeal, inappropriate development is without a doubt our greatest challenge for the future of Culloden and the Trust is seeking the support, expertise and input of Highland Council, Historic Environment Scotland, the Scottish Government and others to tackle this, and we will be beginning discussions with them soon.”

In December 2020, the Trust welcomed triumphant news from the Highland Council that they ruled unanimously against a planning application to convert an equestrian center into a holiday complex. Without the commitment of the Trust and the staff on the ground at Culloden this outcome could have been quite different.

How Americans Can Help

Every dollar of your tax-deductible gift to the Conserve Culloden Fund will help to ensure the integrity of the moor. Will you join us? 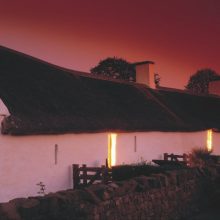 January 2021 marks the 220th anniversary of the first Burns Supper at Burns Cottage, [...]