Along with more than 1,000 tartan samples, we found an intriguing 19th-century papier-mâché and wooden doll when cataloguing the collection at Weaver’s Cottage in Kilbarchan.

Kilbarchan was at the heart of the traditional handloom weaving industry during the 18th and 19th centuries. The majority of the objects in the collection were donated by people from the community after the NTS bought the property in the mid-1950s and they truly reflect the daily life and soul of the village.

Dolls, and toys in general, are everyday objects that can help us understand the social life and behaviour of people who lived centuries ago. Dolls have existed for thousands of years, from papyrus-stuffed ragdolls found in ancient Egypt to mass-produced 1950s Barbie dolls. The earliest dolls were made of simple materials such as clay, bone and wood, and it’s only from the Middle Ages that dolls began to be widely produced in Europe and carefully crafted to look as real as possible.

In the Victorian era dolls often had an instructional function, and girls would play with their dolls and imitate the adults around them. It was only in the early 20th century that ‘baby’ dolls started to appear. The doll from Weaver’s Cottage has a papier-mâché head and torso with hand-painted details, and wooden legs and arms. Papier-mâché is a composition of pieces of paper or pulp and bound with some sort of adhesive, which can be moulded into various shapes when wet and becomes very hard once dry. 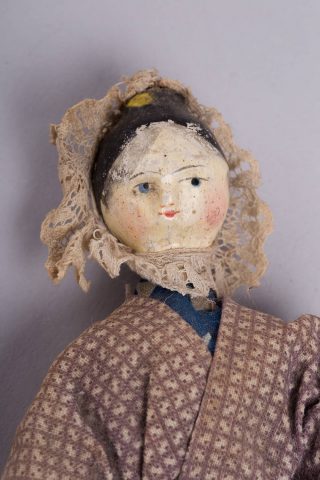 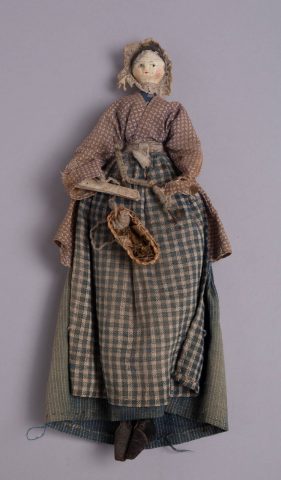 Dolls like this were often sold undressed. Sewing and knitting clothes for them would have been a fun way for young girls to practise these key skills for 19th-century women. Our doll is fully clothed in handmade garments from different scraps of fabric, possibly sewn by its young owner. As well as a very neat camisole, a cotton shirt and a blue skirt, the doll has a cream cotton underskirt and even a woollen petticoat (it can get cold in Kilbarchan!), hand-knitted brown woollen stockings and handmade leather shoes.

To reinforce the value of the doll as a ‘living’ example, it appears to be holding a little wicker basket and is knitting wool, or perhaps creating a thread that could have been used in one of the many looms that were in Kilbarchan at the time. 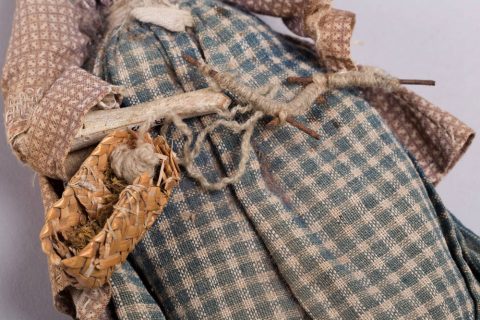 Detail of the basket and spinning tools 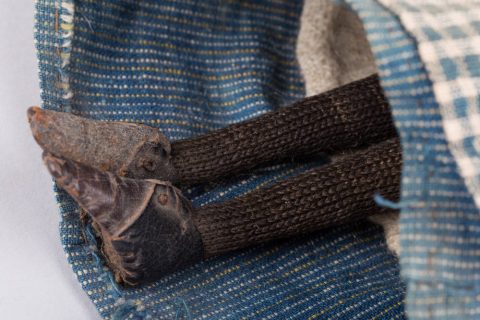 Detail of shoes and woollen stockings

Project Reveal is a multi-site digitization project of unprecedented scale. It will result in an updated database with high quality images and unique object numbers for every item in the Trust material culture collections. With your support, we can help the Trust manage its collections more effectively. Most important, we can help the Trust discover, better understand, and share its treasures with the world. Please help us to secure this major investment in preserving Scotland’s heritage with a tax-deductible donation in support of Project Reveal.

This article was originally published by the National Trust for Scotland on January 11th 2018. 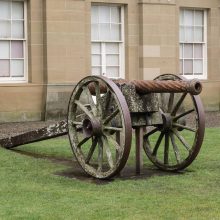 A blast from the past

Project Reveal delve into the history of the two infamous cannons at Culzean Castle, [...]