New York City Tartan Week and the Tartan Day Parade are going virtual! A variety of events and programs will be offered via Zoom and Facebook Live beginning on Monday, April 5. We are delighted to be a part of this week-long celebration of Scottish heritage and invite you to join us for one (or both) of the lectures listed below.

Advance registration is required for the Zoom link.

American folklorist Margaret Fay Shaw dedicated her life to the preservation of the Gaelic language and the lives and culture of the people of the Hebrides. With her husband, British scholar John Lorne Campbell, she amassed a remarkable collection of Gaelic and Celtic songs, stories, and poetry now housed on the island of Canna and cared for by the National Trust for Scotland. Taking a broadcast that Margaret made in the 1950s as its inspiration, singer and archivist Fiona Mackenzie describes the contrast between Margaret’s life as a music student in New York City in the 1950s and the life she ended up with on the Hebridean islands of South Uist and Canna. The program includes Margaret’s voice alongside Fiona’s, as well as images and film clips. Fiona will also update us on the latest conservation work at Canna. A live question and answer session will follow.

In advance of the 275th anniversary of the Battle of Culloden, join the National Trust for Scotland’s Raoul Curtis-Machin and historian Murray Pittock for a virtual walk of the battlefield, where they will share how the latest historical and archaeological research is leading to a new understanding of how the moor’s landscape affected the battle itself. This new research is informing the community’s urgent efforts to protect the battlefield from encroaching development. The two will also discuss the challenge of balancing historical integrity with the business needs of a top international tourist attraction.

Advance registration is required for the Zoom link. 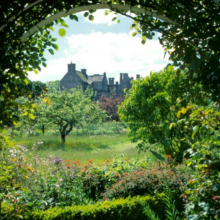 We're offering a one-hour film designed to bring magnificent gardens of Scotland to [...]