The Spice of Life

This battered and forlorn tin box baffled us when we first encountered it in the kitchen at the House of Dun until further investigation revealed it had a fascinating story to tell about the role of women in shaping attitudes toward the British Empire.

A round spice caddy from the kitchen at House of Dun

The black lacquered surface is enhanced by gold bands around the lid and sides, with an interior divided radially into six compartments. It turned out to be a spice caddy dating from the 1850s, designed to hold a range of popular spices such as allspice, cloves, nutmeg, ginger, mace and pepper. But the lids that once topped the compartments and the nutmeg grater that fitted snugly into the central hole are long gone.

The interior of the caddy is divided radially into six compartments, each holding a different spice

Upon further investigation it became apparent that this innocuous object had a fascinating story to tell about the role of women in shaping attitudes towards the British Empire. The use of spices dates back to antiquity – the ancient Egyptians imported cinnamon as early as 1450BC. The Romans had an insatiable appetite for all kinds of spices, sailing as far as India in search of pepper and bartering for ginger and cassia (as well as silks) along the newly expanded Silk Road. After a hiatus in trade, spices once more became popular in the medieval period, when returning Crusaders helped to reintroduce them into Europe, where they were widely used to enhance the flavour of salted and dried foods.

Aiming to break an overland spice trade dominated by east Mediterranean middlemen, most notably the Venetians, explorers such as Christopher Columbus and Vasco da Gama sailed across the oceans in the late 15th century in search of direct sources of supply. And when a group of businessmen met in London in 1599 to establish the East India Company, with a view to bringing back spices from the East Indies, they inadvertently gave birth to the British Empire.

A 17th-century spice cabinet from Crathes Castle, sitting on a later stand

This beautiful oak spice cabinet, found in another Trust property, Crathes Castle, dates from the 17th century and is testament to the high status of spices in the early years of this trade.

By the mid-19th century the use of spices in curries, pickles and chutneys had become so widespread among the middle classes that manufacturers were producing cheap containers such as our own modest lacquered tin to cater for the new demand. Indeed, curry became such a popular dish in Britain that an 1852 cookbook proclaimed ‘few dinners are thought complete unless one is on the table’. William Thackeray went so far as to pen a poem to curry.

The wives of Indian colonialists played a crucial role in popularising Indian-inspired food and spices in their home country. Many sent back or returned home with gifts of Indian artefacts, shawls and jewels for friends and family, helping to create a taste for the ‘exotic’ among the middle classes. They also brought back recipes for curries and other anglicised forms of Indian cuisine, which they published in cookbooks and a rapidly expanding array of journals and magazines aimed at women, such as The Ladies’ Companion, The Ladies’ Treasury and The Queen.

Some writers on Indian cooking had never even been to India, like Mrs Beeton, who included in her Book of Household Management advice on making curries from leftover meat. Others gave their recipes exotic names such as Bombay Curry, Lord Clive’s Curry and Bengal Curry. As the enthusiasm for Indian cuisine increased, so too did the demand for spices – the import of turmeric, for example, increased threefold between 1820 and 1840.

Such was the craze for Indian cuisine and artefacts in the mid-19th century, set in motion by colonial wives returning home from the subcontinent, that the idea of empire increasingly caught the imagination of the British people. Yet, ironically, as curries continued to increase in popularity in Britain, in India they were soon being eradicated from the colonial dinner table in an attempt to maintain racial superiority. As for our humble spice caddy, its heyday would have been short-lived, as by the 1860s the mass production of curry powders by manufacturers such as Crosse & Blackwell would have consigned it to the back of the larder.

This article is by Jilly MacLeod of the Project Reveal Team. Project Reveal is a multi-site digitization project of unprecedented scale. It will result in an updated database with high quality images and unique object numbers for every item in the Trust material culture collections. With your support, we can help the Trust manage its collections more effectively. Most important, we can help the Trust discover, better understand, and share its treasures with the world. 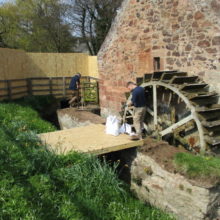 After a successful international fundraising campaign, work to repair the water wheel [...]