Good friends and NTSUSA supporters Anthony and Anne MacLaurin open up their home to share this lovely story about their project to revitalize the artistry of a Scottish painted ceiling.  Our friend and guest blogger Anne Macpherson, a dedicated member of Clan Macpherson Association, US Branch, brings us this story.

A Renaissance Painted Ceiling in Scotland Inspires a Masterpiece in Vermont

Anthony and Anne MacLaurin are both Scottish and lived in Scotland for over forty years.  They are now settled in Manchester, Vermont, and they dearly wanted a “bit of Scottishness” to grace their new home.

As a boy MacLaurin and his father loved to search out and explore the wonderful castles of their Scottish homeland, one castle, Crathes Castle, made a lasting impression on young Anthony.  Throughout his life Anthony kept those images in his mind and cherished his Scottish heritage.

One of the many painted ceilings at Crathes Castle, Scotland

Late in 2011, while in local bookstore, Northshire Bookstore in Manchester, Vermont, Anthony asked the clerk if there were any artists who could take on a large-scale mural project for the MacLaurin’s newly constructed dining room ceiling.  Anthony and his wife Anne were introduced to Kim Ray, a well-known Vermont muralist, whose studio is located in nearby Londonderry. The artist and homeowners soon began a year’s worth of research to create a painted ceiling at Balquidder, the MacLaurin’s home.

After researching the height of the Scottish Renaissance, Kim Ray went to work consulting with artists in Scotland to unearth information about materials used and the stories told in Scottish murals. “While I researched many castles, it was Anthony’s dream to recreate the ceiling at Crathes Castle that he loved so much,” says Ray.  “The mural was designed for the hexagonal ceiling of the MacLaurin’s dining room. Composed of 8 triangular panels, it tells the story of Renaissance Scotland, the magic, the mystery, the story of court life under James the VI, later to become James I of England.” Kim worked out each trapezoidal panel keeping true to the authenticity of the imagery and time period. Each panel relates to the entire composition and the images are balanced from panel to panel.

“The eight panels tell the story of an historic time in Scotland. The Renaissance impacted Scotland in a marvelous way,” says Kim. “Suddenly artists were freed from the strict ecclesiastical restrictions of the Catholic Church, creativity burst forth, effecting writing, song, poetry, and even in fashion.” The sky was the limit and ceilings were not left out as a place for creative work,” explains Ray.

“The mural is composed of the decorative arts of the period, many taken from Flemish pattern books with popular images of the time, these are speaking pictures. The ceiling details historic Scottish themes and images. The figures represented on the panels are nature; the seasons; the five senses; virtues such as faith, hope, and temperance; and the Muses. The panels also feature the Nine Worthies: the pagan heroes – Hector, Alexander the Great, and Julius Caesar; the Jewish Worthies – Joshua, David and Judas Maccabeus; and the great Christian kings – King Arthur, Charlemagne, and Godfrey of Boullon. These men were considered to represent all that was noble in life and were known as models of knighthood and chivalry.

Installing the painted ceiling at Balquhidder

The panels also feature: Robert the Bruce; the Rampant Lion of Scotland; a great stag, the ancient Celtic symbol of power and the energy of nature; grotesques, strange animal-human shapes; fantastic creatures including mermaids and selkies; religious themes such as the Virgin Mary, Christ, and the Church; animals with great meaning dating back to the Druids; as well as representations of fruits, flowers, and vegetables.

The ceiling is personalized with MacLaurin’s family crest and initials. Other panels have Gaelic sayings such as ‘Go mbeidh sochain ar domhain’ (May peace prevail on earth), ‘Yer bums oot the windae’ (You are speaking rubbish), and ‘Lang may yer lum reek’ (May you live a long life).  Some panels have a touch of whimsy, a monkey who sees no evil and a little grotesque in the opposite corner. The eight panels, separated by beautifully decorated boarders, are topped by the Tudor rose, a nod to the couple’s English heritage.

The paint that Kim used was the same paint that was used during the period. Called flase, the paint delivers a permanent high density pigment. It dries with intense color that has a completely matte finish.

Now completely installed, Kim Ray’s year-long project now lives proudly in the MacLaurin’s dining room. The painted ceiling at Balquhidder is a testament to one man’s dream and an artist’s fantastic talent and vision.

Today Crathes Castle, the inspiration for the MacLaurin’s ceiling mural, is under the protection of the National Trust for Scotland.

Kimberly Ray has been a decorative painter specializing in custom fine art work and murals since 2001.  She has done commissioned works throughout United States and beyond. For more information about Kim go to www.kimraymurals.com. 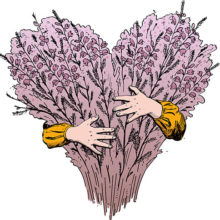