Archaeology is vital to protecting and caring for Scotland’s heritage. The excavation of even the smallest of historic sites can reveal a wealth of valuable information with the potential to change the narrative of history as we know it. The National Trust for Scotland has their own in-house team of archaeologists who work across 11,000 sites uncovering Scotland’s past from Mesolithic times (8500BC-4000BC) to the modern day. Not only does archaeology reveal new and exciting discoveries about Scottish history, but it also affects how we protect and conserve the sites and properties in our care. From finding a 16th-century coin at Castle Fraser, a hidden prison in Alloa Tower and human skeletons at the House of Binns you could say the Trust has had some exciting discoveries come to light. So, let’s dig deeper and explore some examples of the Trust’s archaeologists uncovering history and broadening our knowledge of the sites we work to protect.

With Culzean Castle being one of the most visited tourist attractions in Scotland, it is surprising to learn that this cliff-top masterpiece is built on a series of caves with a storied past. While on site last year, an excavation revealed the remains of a medieval doorway leading into the caves as well as evidence to suggest that they were occupied as far back as the Iron Age. Following this discovery there was an influx of interest in touring this area of the estate, so the Trust set out to improve visitor access and interpret the many stories which include the likes of ghosts, smugglers and hidden fugitives.

Archaeologists and volunteers working by lamplight in the caves under Culzean Castle.

Artifacts on display in the visitor center at Culloden

Another interesting discovery was at the Culloden Battlefield when the Trust commissioned Professor Tony Pollard and the University of Glasgow’s Centre for Battlefield Archaeology to explore the site where the 1745 Jacobite Rising came to its tragic end. A number of intriguing objects were unearthed including a pistol and musket shot, cannon balls, buckles, buttons and personal ornaments, revealing that both the Jacobite and Hanoverian lines extend further to the south than previously believed. These artifacts are now on display in the visitor center at Culloden, exhibiting how archaeology can bring history literally to the surface for visitors to truly engage with.

Ben Lawers National Nature Reserve consists of several of Scotland’s highest munros and is much loved by outdoor enthusiasts. However, archaeologists are drawn to this site for its medieval significance and it has become one of the most intensively investigated landscapes in all of Scotland. A large-scale research project set out to improve knowledge of the medieval landscape at Ben Lawers and how it evolved over time. After more than 22 weeks of work powered by volunteer labor over four seasons, the results were invaluable. An extensive mapping survey was completed which uncovered over 2,000 11th to 13th century turf-built structures and 185 miles of stone dykes, earth banks and trackways. The team were able to link these findings with specific historical references in the Breadalbane Estate archives and a detailed report was published which became the touchstone for all medieval and post-medieval highland landscapes.

Remarkable archaeological discoveries continue as a number of large-scale excavations were completed recently at the 1719 battle site at Glenshiel and at the Glencoe settlement of Achtriachtan. Derek Alexander, the Trust’s Head of Archaeology, is visiting North Carolina, Boston and Nantucket in July 2019 to speak about early results of these projects and future avenues of research and public engagement at these sites. Derek studied prehistoric archaeology at the University of Edinburgh and joined the Trust in 2000. We are excited for him to share his expertise and unveil more fascinating Highlands history!

Keep an eye on our email newsletters for future visits from National Trust for Scotland experts. Scroll to the bottom of the page to sign up today.

Tickets are available for purchase at the door or online.

Have you ever wanted to try your hand at archaeology? If you want the chance to contribute to the exciting research happening across Scotland and dig a little deeper into Scottish history (literally!) the National Trust for Scotland’s Thistle Camp program offers just that. For more information on how to get involved visit https://www.nts.org.uk/ThistleCamps/. 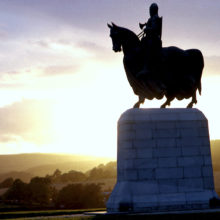 Following in the Footsteps of Freedom

Exploring a surprising connection between Scotland's Declaration of Arbroath and the [...]