Palmtrees and Goddesses at Culross Palace

The top floor of Culross Palace has a sumptuous Renaissance ceiling complete with Scottish words of wisdom, but is everything as it seems?

Culross Palace was built between 1597 and 1611 for George Bruce, a merchant and engineer. Among other achievements, he came up with a revolutionary technique of mining coal from under the River Forth and extracting it via a mineshaft in the middle of the river, directly onto boats. He became a very wealthy man and his mansion reflected that: Culross Palace is a beautiful example of late 16th- and early 17th-century design.

The Painted Chamber on the second floor of the main building features 16 allegorical paintings on its wood-lined ceiling. The paintings were produced sometime between the construction of the main house in 1597 and the building of the North Block in 1611 (the year after George Bruce received his knighthood). 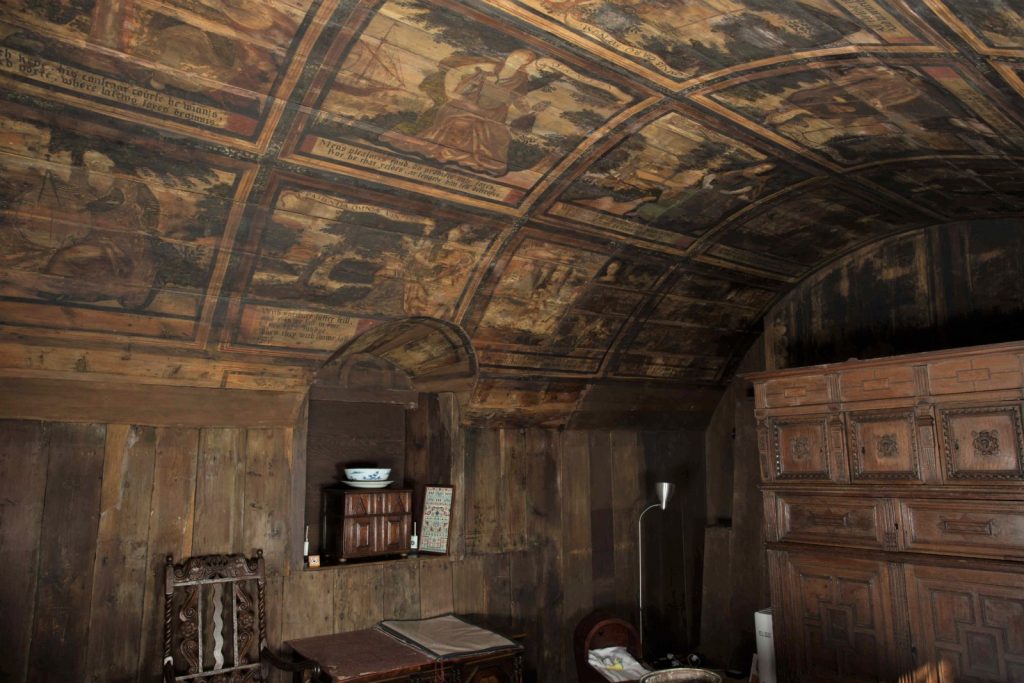 The painted ceiling at Culross

The paintings are of equal size and each consists of a scene painted in tempera (a kind of paint in which the colour is mixed with water and egg), with a Latin maxim above and a rhyming couplet written in Scots below. This gives these paintings a particularly Scottish flavour. Some of the paintings are badly faded, but with a little patience they offer up some interesting talking points.

The identity of the artist or artists working at Culross is unknown, but it is highly likely they used Choice of Emblemes as inspiration for the paintings. This book, written by Geffrey Whitney in 1586, is an emblem book and was the first book of this kind written in English. These books were popular throughout continental Europe in the 16th and 17th centuries and comprised allegorical illustrations with accompanying explanatory text. While some of the Culross paintings are almost direct copies, others are variations on a theme and provide a fun collection of visual stories with moralistic undertones.

The painting titled ‘Omnis caro foenum’ (All flesh is grass) is a good example of how the artist adapted Whitney’s work – and how later restorers may have misinterpreted the original. The goddess Flora is shown seated, holding a vase with a bouquet of flowers inside. On her left is another vase with flowers; to her right is a healthy palm tree with a single withered bough. Underneath, the couplet reads:

All flesche is grasse and withereth lyk the haye,

And warneth us how weill to live but not how long to waye.

These words have been crafted from the first and last lines of Whitney’s verse, and translated into Scots. Whitney’s verse also contains a reference to Flora, which explains her presence in the Culross painting. 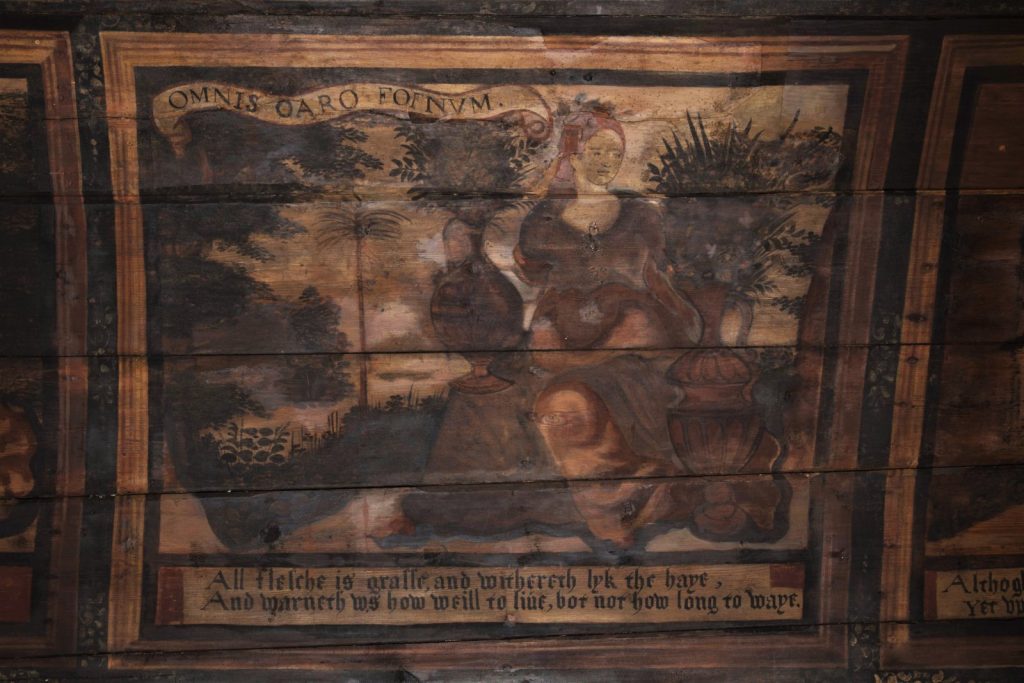 ‘Omnis caro foenum’ (All flesh is grass), with the goddess Flora in the foreground

However, what should we make of the mysterious palm tree in the background, for which there is no reference in Whitney’s woodcut or verse? Whitney’s parallel representation for this maxim is a bundle of hay hanging from a staff, which is nowhere to be seen. In all the other Culross paintings, Whitney’s original image is repeated somewhere, so this is a little odd. 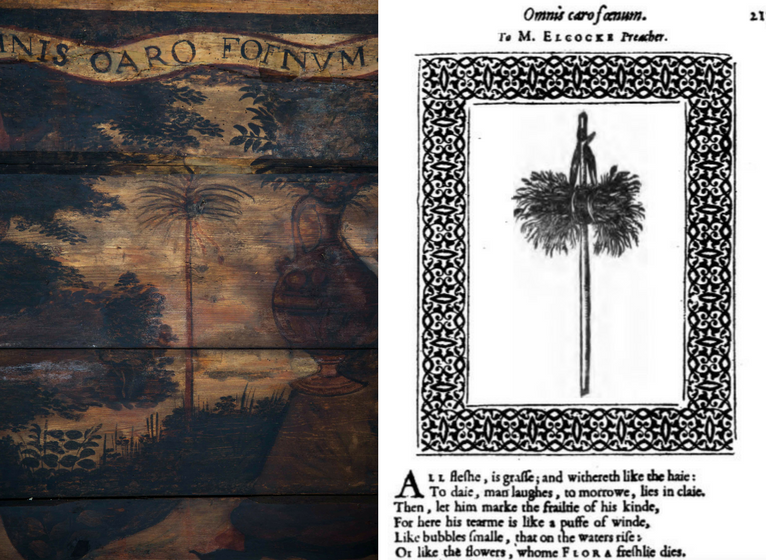 It is likely that the artist at Culross did put the bundle of hay in the background, where the tree is now. Presumably, by the time a later restorer came to work on the paintings, they could make no sense of the faded bundle of hay on a staff, and so put a flourishing palm tree in its place instead. Similar misunderstandings appear to have occurred throughout the Culross painted ceiling, and it would be fascinating to explore them further, possibly using scientific photographic techniques such as infra-red cameras or ultra-violet light.

Hay or palm tree, Culross Palace houses a remarkable selection of paintings designed to offer pieces of Scottish wisdom as well as perhaps brighten up the home.

This article is greatly indebted to the work of Michael Bath in his book Renaissance Decorative Painting in Scotland.

Originally published by the National Trust for Scotland on October 11, 2017.

What’s in the Box?

Down in the depths of Newhailes, Project Reveal Team East unearthed a treasure trove [...]