This Event is Sold Out

The Campaign for Hill House

Today, from his iconic Glasgow School of Art to the Willow Tea Rooms, Mackintosh’s work is in the midst of a conservation renaissance – one that happens to coincide with celebrations of his 150th birthday. The National Trust for Scotland is launching a project to preserve Hill House, a suburban villa that is the architect’s most significant domestic design. More than a century of harsh weather conditions threaten the property and its priceless interiors, and a radical conservation approach has been developed.

Just as Mackintosh’s unornamented aesthetic went on to influence International Style architects like Le Corbusier, the questions raised by the restoration of his buildings have the ability to impact the preservation of early modern architecture around the world.

The Hill House from southeast corner

John Kinnear, Principal of John Kinnear Architects and President of the American Friends of the Georgian Group, has an architectural practice based in Manhattan, which undertakes projects throughout the United States.

The firm is noted for its historical preservation as well as new structures incorporating traditional design styles. Recent projects include the restoration of the Ruth Mansion in Delaware, 26 Commerce Street in Greenwich Village, and The Queen Elizabeth II September 11th Garden in Hanover Square for which he was the Project Architect.

Kirstin Bridier is executive director of The National Trust for Scotland Foundation USA. She previously served as the curator of education for the Nantucket Historical Association during the renovation and reinterpretation of their flagship Whaling Museum and led corporate and foundation giving for the Isabella Stewart Gardner Museum and Museum of Fine Arts, Boston. Kirstin attended Smith College and holds an M.Sc. in historic preservation from the University of Pennsylvania. 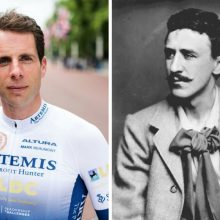