The “Love Our Islands’’ campaign comes to an end this week marked by the 30th anniversary of St Kilda being a “UNESCO Dual World Heritage” site. A UNESCO site is the title given to places on Earth that have been recognized for their universal value to humanity and inscribed on the World Heritage List to be protected for future generations to appreciate and enjoy.  The #loveourislands campaign highlights how important the work of the National Trust for Scotland is in maintaining our islands, their spectacular scenery, culture, archaeological importance, and wildlife. The particular focus of the campaign is the archipelago of St Kilda which has been in the care of the trust for 60 years. With recent figures of its seabird population showing a decline it emphasizes why we need to continue to care for and love our islands. 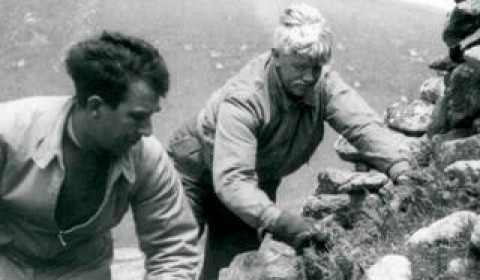 St Kilda is made up of four islands, Hirta, Soay, Boreray, and Dun which are located 41 miles west of Benbecula in Scotland’s Outer Hebrides. It is unknown when the main island, Hirta, first became inhabited but it is thought to be thousands of years ago with the last settlers evacuating in 1930.

For thousands of years, life on St Kilda was undisturbed, the islanders led an isolated life with the population never reaching more than 200. This way of life, however, began to change in 1877 as “SS Dunara Castle” began summer cruises to St Kilda. The previously remote and inaccessible archipelago became a popular destination during the summer months. The cruises allowed an increase in communication and visitation with the mainland aiding the importing of certain goods. This led to the loss of self-sufficiency that the settlers had developed over many generations and it was still not enough to make island life sustainable.

The residents of St Kilda adapted and prepared for the tourists that came each summer, making gifts and souvenirs for their upcoming visits. Despite the imports and improvement to the economy of the island, there was an acute food shortage in 1912 followed by an outbreak of influenza in 1913. The conditions were so harsh that the younger islanders, in search of a better quality of life and job prospects, chose to emigrate from St Kilda. Many were lost at sea when they decided to make the dangerous journey to Melbourne, Australia. The early 20th-century migration led to a dwindling population on the island and in 1930 the remaining 36 islanders evacuated St Kilda.

An insight into the community who survived the inhospitable conditions of the island can be seen in the diaries that they kept click here. The diary excerpts detail the multiple uses of the seabirds at St Kilda, from using the animals to pay rent to eating them for supper. 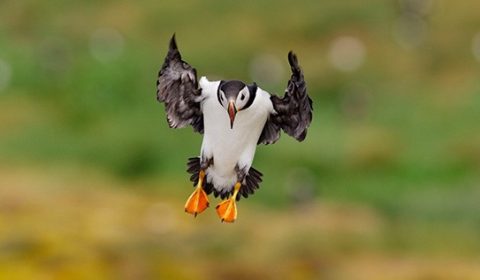 While the seabird colony on the island is currently the largest in Europe the number of black-legged kittiwakes at St Kilda has decreased by 90% in the last 15 years. It is important that the birds don’t follow their predecessors and evacuate the island. The #loveourislands campaign is raising awareness for this increasing problem, emphasizing the vulnerability of the natural environment and the effect it is having on the wildlife.

Like the SS Dunara Castle cruise to St Kilda, the NTS “Colours of the Celts” cruise allows you to visit many Scottish islands including St Kilda where you can explore the remains of the village on Hirta.

The #loveourislands campaign also helps support other islands and coastal places in NTS care. Here at the Foundation loving our islands is a big focus this summer and fall especially Arran with our two projects at Coire Lan and Glen Rosa. 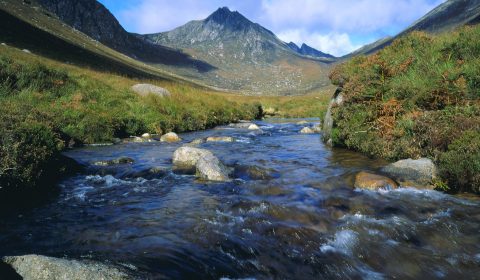 Unlike St Kilda, Arran is one of the most accessible islands in Scotland and is still populated today. Goatfell, at 874m (2,866ft), is the highest peak on Arran providing stunning views that stretch as far as the coast of Ireland. With its jagged summits and ridges created by glaciers during the last ice age, the Goatfell range is frequently an iconic sight incorporated into other walks on the island.

The first of the projects on Arran is Glen Rosa, a popular path with walkers starting at the Arran Brewery and making a gradual climb to the scenic views of Goatfell. A large section of the path has been completely destroyed by flash flooding which altered the course of the river. Re-aligning the footpath to avoid the flood area will require a helicopter to bring material to the site and will consist of a full build construction. The remnants of the old path will be re-landscaped to allow the vegetation to recover.

Coire Lan is another path for hillwalkers looking for a more challenging climb up the range. Like Glen Rosa, it has been affected by flash flooding and is in need of restoration work. Large surface sections have been lost and need to be replaced; at the same time, additional storm drainage will be installed to prevent flash flood erosion from happening in the future.

Hillwalking is one of the biggest attractions in Arran and with these views it is clear why. At the Foundation, we want to ensure everyone has a chance to love our islands and experience them for their full beauty. The effects of environmental change are impacting not just St Kilda and Arran but all our islands. In order to maintain their accessibility and protect their fragile ecosystems, they require constant conservation work by the trust. Show your support by donating to the projects and show our islands some love.

Our brand new Marketing Communications intern Lauren has finally arrived to join us [...]