Many legends surround the House of the Binns and its most notorious resident, General Tam Dalyell. The table upon which the Devil and Tam supposedly played cards is from one of the many tales of his fascinating life. 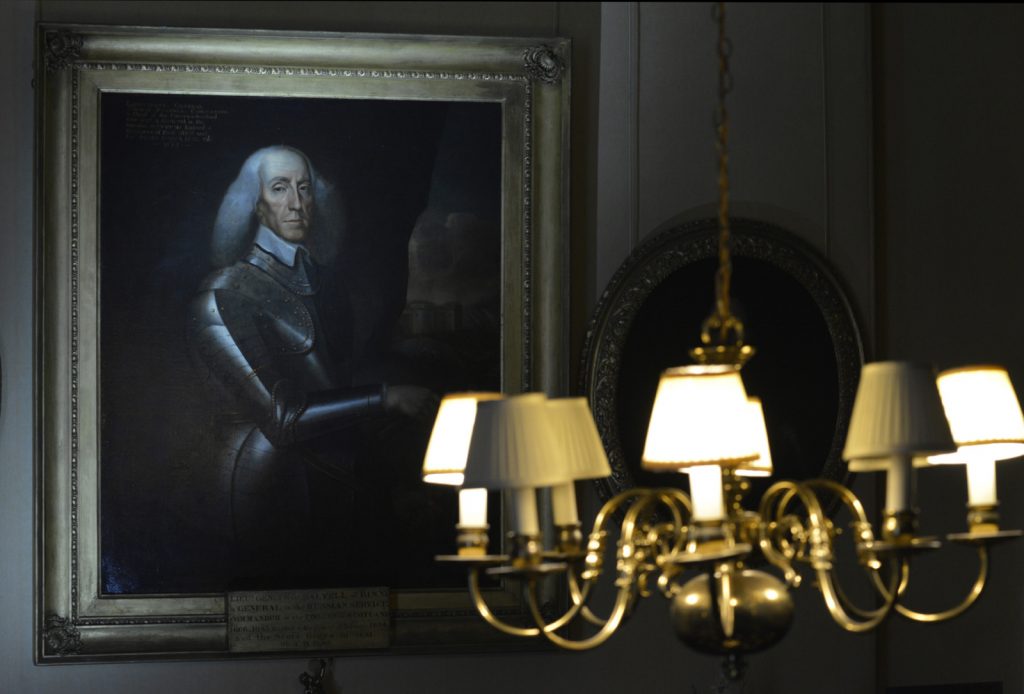 This month, Project Reveal Team East moved to the House of the Binns, ancestral home of the Dalyell family. One of its most infamous inhabitants was Thomas Dalyell (1615–85), General and Commander-in-Chief of the king’s forces in Scotland. Dalyell first entered military service as a teenager, when he went to France in support of the Huguenot cause, before serving in Ulster where he reached the rank of colonel. He was imprisoned in the Tower of London after the Battle of Worcester in 1651, but managed to escape. He later fled to Russia, where he served Tsar Alexis I, father of Peter the Great, in the Russo-Polish War and in other conflicts against the Turks and the Tartars. Credited with bringing the thumbscrew over to Britain, his time in the Russian military also earned him the nickname the ‘Muscovite De’il’. It was after the suppression of the Pentland Rising at Rullion Green, at which over 1,200 captured Covenanters were tortured and imprisoned in Greyfriar’s Kirkyard, that he gained his more common epithet, ‘Bluidy Tam’. 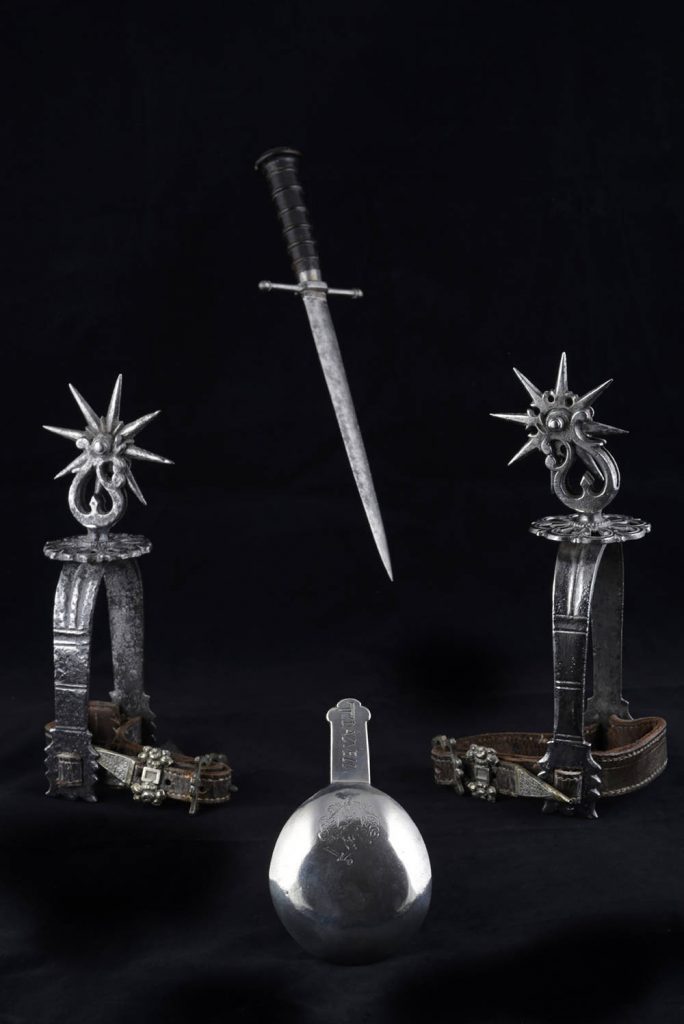 It was after Dalyell’s death in 1685 that the legends surrounding ‘Bluidy Tam’ really began to develop. They include accounts of the General’s cavalry boots marching round the house on their own at night and of a ghostly rider on a white stallion galloping along the road towards The Binns. The most famous tale concerns a marble-topped table in the entrance hall. Dalyell allegedly used this table when he played cards with the Devil. During one game, in order to finally beat his fiendish opponent, Dalyell placed a mirror behind the table so that he could read the Devil’s cards. Angered by the cheating, Auld Nick threw the table at the General, which narrowly missed him and ended up in a pond outside. The table was assumed missing and its exact whereabouts were soon lost in the mists of time. However, almost two centuries later, during a drought in the summer of 1878, the table was rediscovered at the bottom of the dried-up Sergeant’s Pond and restored to its rightful place inside the house. 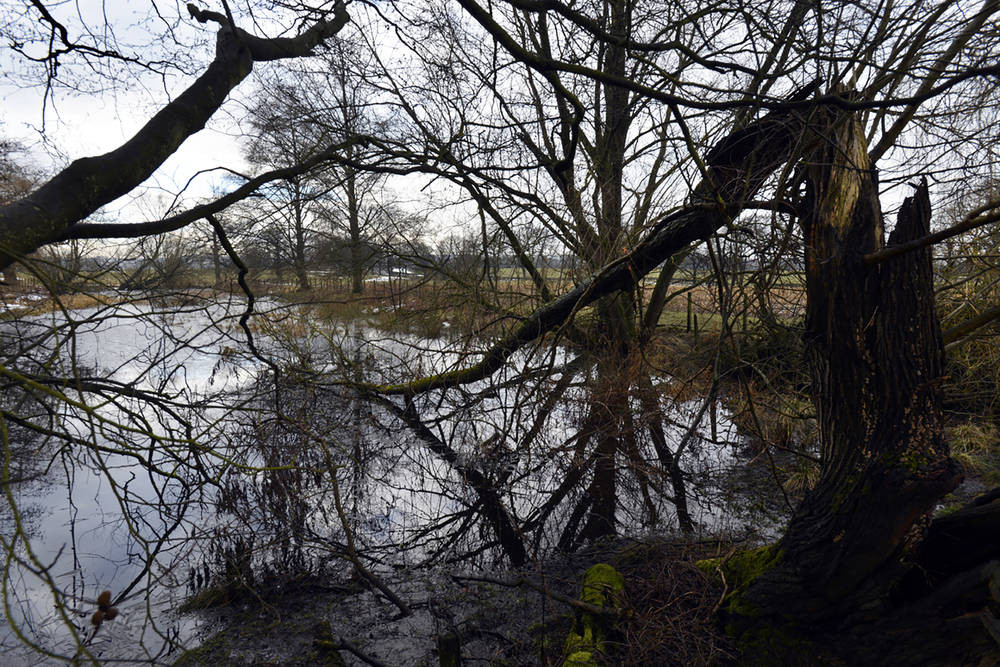 The Sergeant’s Pond where the table was rediscovered 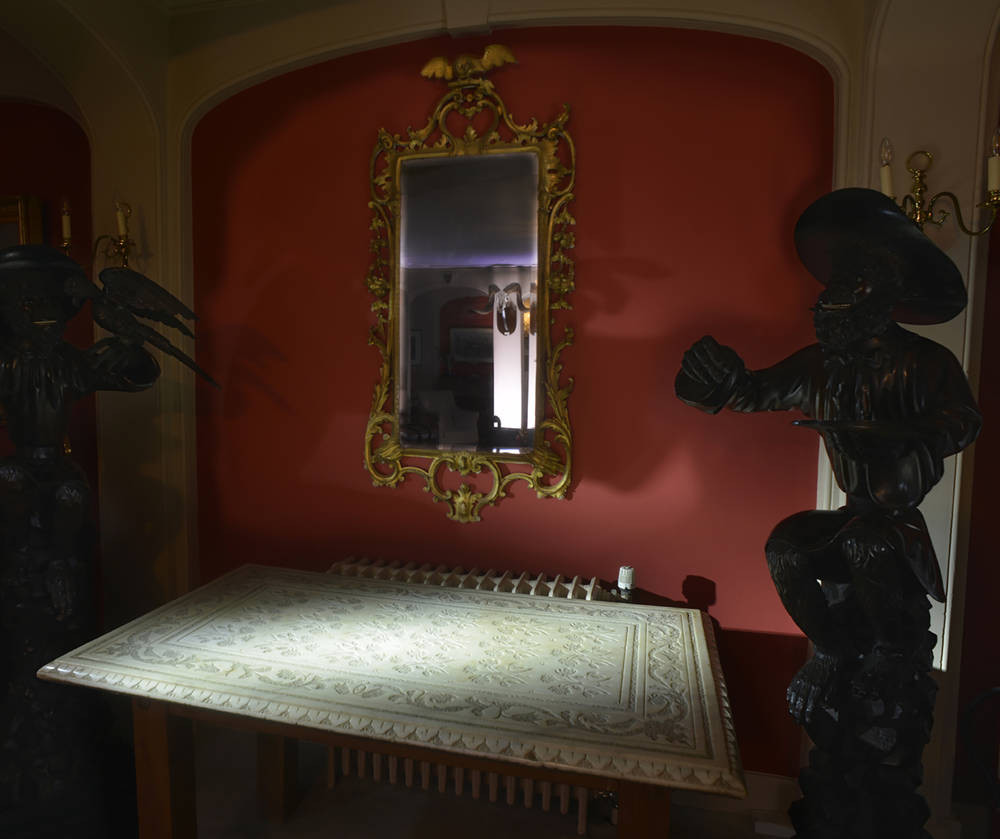 It is an interesting object beyond the legend. Crafted from white marble, the top is carved with a floral design where semi-precious or precious stones were once inlaid. The stones are now missing, but we can imagine how luxurious it must have once looked. It is attributed to be a piece of Mughal furniture, brought back to Scotland from India by Dalyell during his travels abroad. The Indian technique for inlaying stones in this way is called parchin kari, adapted in the early 17th century from the Italian technique pietre dure, which had spread by trade to reach the Mughal court. One distinctive feature of this table could be ‘proof’ of the legend of Dalyell and the Devil, which describes a satanic hoof mark seared into the table. Indeed, the back corner of the table has a distinctive semi-circular stain. Is this the mark of the Devil? We’ll let you decide.

‘The Devil is in the detail’ – could this be the Devil’s hoof print?

This article is by Michelle Atherton, Alexandra Hill and Kevin MacLean of Project Reveal Team East. Project Reveal is a multi-site digitization project of unprecedented scale. It will result in an updated database with high quality images and unique object numbers for every item in the Trust material culture collections. With your support, we can help the Trust manage its collections more effectively. Most important, we can help the Trust discover, better understand, and share its treasures with the world.

This article was originally published by the National Trust for Scotland on April 3, 2018.

Souter Johnnie: the Man Behind the Legend