We are thrilled to share the news that David Ross, NTS USA’s official photographer, was honored on November 27th in London with the Historic Photographer of the Year Award (ancient history category). The award presentation was part of Historic England’s annual ‘Angel Awards’ event celebrating people who have made a significant contribution to local history and heritage preservation.

David on stage with the presenter Bettany Hughes and fellow award-winner Daniel Burton.

I am over the moon to receive the 2018 Historic Photographer of the Year Award (Ancient History). I feel blessed to be able to explore this amazing country with camera in hand and indulge my twin passions of photography and history! And a heartfelt thank you to my wife Rosemary for putting up (with varying degrees of patience) with over 3 decades of me saying ‘just one more photo’!’

David Ross’ photography captures the very best moments at locations across Great Britain, with many beautiful shots taken in Scotland. His winning photo, and many more, are available for purchase as a framed print, canvas print, greeting card or even a mobile phone case here.  We also recommend following him at BritainExpress for expert guidance on heritage travel in the UK!

Historic Photographer of the Year is an annual photo competition calling on photographers from around the world to explore and capture the very best historic places and cultural sites that the world has to offer. For 2018 the awards included categories for Ancient History, English History, and Short Films.

The annual awards are organised by Trip Historic, a leading online travel guide to the world’s historic sites and were sponsored in 2018 by History Hit TV, a multi-channel history network led by historian and broadcaster Dan Snow, the television channel HISTORY™, the Association For Historical And Fine Art Photography, (AHFAP) and Historic England (formerly English Heritage), the public body that helps people care for, enjoy and celebrate England’s historic environment.

The Historic Photographer of the Year Awards were presented in a ceremony at the Gillian Lynne Theatre in London’s Soho district on November 27, 2018 as part of Historic England’s annual ”Angel Awards’ event celebrating people who have made a significant contribution to local history and heritage preservation throughout England. The event is sponsored in part by the Andrew Lloyd Webber Foundation. 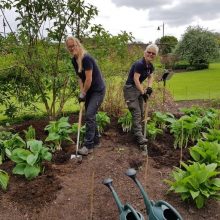 NTS has made significant progress with the Percy Cane garden restoration at Falkland [...]