On the next stop of her trip, our Saltire Scholar Eilidh travelled north to visit Culloden Battlefield, the site of one of the most significant battles in Scottish history.

After the first stop of my adventure at The Hill House, my next visit was to Culloden Battlefield in the north of Scotland near Inverness. I had studied the Jacobite era in high school, however my knowledge was rusty, so I was looking forward to refreshing my understanding of the battle. Before setting off to Culloden, I visited the site of the January 1746 Battle of Falkirk Muir, the last Jacobite battle on British soil to take place before the events at Culloden. As the battle was a resounding victory for Prince Charles and the Jacobites, walking around the Muir piqued my interest in discovering what led to the staggering loss at Culloden just three months later. My trip to Culloden Battlefield wasn’t as simple this time as hopping on the train from Glasgow. Instead, I set off bright and early in the morning and drove a few hours to the property — although the journey took longer thanks to my poor navigation skills! In typical Scottish fashion, the weather was ever-changing, but luckily, I managed to avoid the rain just as I arrived at the visitor center.

The exhibition at Culloden is unique in that it is split to present both sides of the battle in great detail. On the 16th of April 1746, the Jacobites were led by Bonnie Prince Charlie in his efforts to reclaim the British throne for the Stuart cause against the government forces under the Duke of Cumberland. What followed was a disastrous fight for the Jacobites, with 1,500 Jacobite soldiers losing their lives within the first hour of battle and the Jacobite rebellion effectively quashed. The exhibition included unique historical artefacts and weaponry, such as a blunderbuss (acquired by the National Trust for Scotland through the support of American donors), and original letters written by Bonnie Prince Charlie to the King of France, King Louis XV. Walking through each step of the Rising, from the lead up to the battle to the aftermath, and from the Jacobite’s and the Government’s respective experiences, allowed me to develop a deeper understanding of the battle than from what I had read in books.

The museum exhibition at Culloden

At the mid-way point of the exhibition, visitors are thrown into the center of the fighting in the museum’s 360-degree battle immersion theater. Despite only lasting a few minutes, I was transported back to the 18th century and witnessed the intensity and frenzied nature of the combat. The theater was certainly successful in delivering a haunting insight into the battle, and upon exiting the theater, I walked through a corridor with the fatalities listed on the walls, emphasizing the personal, individual toll of the battle.

After engaging with the exhibition, I made my way to the Moor, the site of the battle and final resting place of the soldiers who lost their lives. A melancholy, somber atmosphere, the flags on the battlefield mark the front lines of both armies: red flags denoting the Government troops and blue flags for the Jacobite troops. Throughout the battlefield, stone markers display the names of Clans who fought at Culloden, representing where each Clan’s soldiers were buried. Walking through the vast battlefield, which is largely undeveloped and has changed relatively little since the battle, gave me a real sense of perspective and understanding in the scale of the battle and lives lost in the combat. It was a powerful experience I won’t forget any time soon.

Just as I was leaving the battlefield, I spotted some of the activities going on at Culloden to maintain the site: the work of the conservation coos! This unique team is made up of a fleet of cattle, goats, and ponies helping to preserve the battlefield by grazing, protecting the landscape and archaeological sites. Thanks to our generous American donors, we have been able to support the conservation efforts at Culloden by purchasing and caring for cattle at Culloden, helping to look after the natural landscapes sustainably.

I left Culloden feeling impressed – visiting the battlefield was an emotive, worthwhile experience that I would thoroughly recommend to anyone looking to brush up on their knowledge on the Jacobite era and its influence on Scotland today.

The memorial cairn on Culloden Moor

For our friends who are attending the upcoming Grandfather Mountain Highland Games, we’re excited to have Catriona McIntosh, NTS Estate Manager of Culloden Battlefield, in attendance with us at the Games! Make sure to come along to her talk at 11.30am on Friday, July 8 and Saturday, July 9 at the Scottish Cultural Village Tent where she’ll be discussing Culloden, its conservation and tourism, and what’s next for the property. You won’t want to miss it!

NTS recently celebrated the 275th anniversary of the Battle of Culloden. To honor the battle, volunteers at Culloden released a series of podcasts on the battle and its aftermath.

If you would like to make a donation to support the NTSUSA’s Conserve Culloden Fund, which will allow us to oppose commercial development on the battlefield and safeguard its future; please follow the link below. 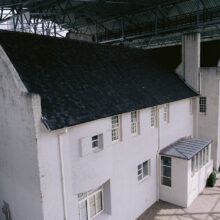 A Visit to The Hill House

Our Saltire Scholar Eilidh discusses her visit to The Hill House in May and her [...]