Walking in the Steps of our Ancestors

Our Saltire Scholar Tierney catches up with Bruce and Judy McRae of Clan MacRae Society of North America following their recent visit to the Grandfather Mountain Highland Games, to find out what being part of a clan means to them and why they keep returning to the Games year after year. They discuss the importance of preserving Scottish heritage, and how walking in the steps of our ancestors can enrich our lives today.

NTSUSA: How did you get involved with Clan MacRae?

Bruce McRae: We had moved to Denver in 1993 and they had some Scottish games there. I had always wanted to go to some but had never done it.

Judy McRae: That was the Longs Peak highland games in Estes Park, Colorado – those games are named after a mountain too, Longs Peak.

B: Those mountains are really high, the peaks that surround Estes Park are around 14000 feet, and I just loved it because I envisioned that they were going to be just like Scotland. We went to the games and had a great experience, however there was no Clan MacRae tent! There were MacKenzies and the others, but no MacRaes. That just helped fuel my desire to be more involved and a little after that, I got a card from a Richard MacRae who wanted us to help him do the tents. And that really ignited my fire and that’s when we really got involved with Clan MacRae.

NTSUSA: Can you tell me more about the Clan’s links with the Grandfather Mountain Highland Games?

B: Clan MacRae Society of North America was founded at the Grandfather Mountain Games in 1973 and so it’s the home, if you will.

J: It is kind of special to go back there because the MacRaes were a huge part of the games getting going. Grandfather Mountain Highlanders Pipe Band even wear MacRae tartan kilts!

NTSUSA: Do you get a lot of interest in the Clan when you go to the Games?

J: We do! When people here in America go to these Scottish festivals there’s usually a marquee somewhere that tells you which clans are there. People always look for their ancestry names. When we were at Grandfather, especially the first day of the festival, it was incredibly busy. People were coming up nonstop going “oh my gosh, my mother was a MacRae!” I don’t know whether its ancestry companies doing commercials, or tv shows like “Who Do You Think You Are?”. Right now, I think we’re just at a real peak of people wanting to know who they are, they want to know who their roots are, who their ancestors were, where they came from, their stories.

NTSUSA: What does being part of a clan organization mean to you?

B: I just love to see the sparkle in the eye of the people that come to the tent because to me they’re family. We have our genealogist, his name is Larry Cates, and he’s spent over 25 years researching all of the MacRaes of the southeast United States.

J: Larry was a true gem to our society. He was a librarian and he published 2 volumes on MacRae history and they’re his life’s work. He actually allowed us to put up the text on our website for our members.

B: Most of the early MacRaes that left Scotland settled in North Carolina. At Grandfather Mountain, I start talking to people about their family and I say “what’s your most distant ancestor?” They give me a name and I pull out Larry’s book and I look that name up and it’s there. I sit at a table with them and get to see the glow and the excitement as they start reading about ancestors that they did not know anything about. Immediately they say how can I get this book and join the clan?

J: I think the word “clan” in Gaelic means family. Bruce and I have done this for so long, and we host tours of Scotland – we’ve done 5 of them – but we feel like we have family all over the US and all over the world.

NTSUSA: Tell me more about the tours you’ve taken to Scotland in the past.

J: Most of the tours we have done have been around the Clan MacRae gatherings. In 2009, Edinburgh did the International Gathering of Clans – it was kind of a big deal. Prince Charles came, there was this huge clan parade down the Royal Mile. It wasn’t a normal Tattoo; it was a very unique presentation of Scottish history and diaspora. We had 84 people sign up for that tour. People wanted to go – they did the International Clan Gathering one weekend then the Clan MacRae gathering at Eilean Donan the next weekend.

B: Several of my distant cousins went on that tour. One was the CEO of a large bank, he had to get back early to the bank and so he had to leave when we were in Plockton. I started talking to him at the train station and – I’m tearing up now myself – he started crying. He loved it and he was so taken. The camaraderie and the love and the family just blew him away.

NTSUSA: Would you say it’s important for you to have those connections with Scotland as well as with each other?

J: For people with Scottish ancestry, it’s a lifetime dream of theirs. On our last tour we had Peter MacRae, he was in his 80s and it had been a lifetime goal of his to go to Scotland. He was so excited to be there. When we’re in Edinburgh we normally climb Arthur’s Seat to recreate a MacRae boycott against the British army. The day we were going to do the climb it was stormy, at least half of our coach decided not to go out in it. But not Peter! He and his wife got totally soaked but they had the time of their life. That’s another thing that we love, we love taking people to Scotland that have never been there before and introducing them to the history both of Scotland and of Clan MacRae. When I look back over the past 25 years or so – we have had a tremendous amount of fun with Clan MacRae. Whether it was at the games in Colorado, or North Carolina, or in Scotland, just so many good memories. People come and then they see it and they want to get involved. We’ll stay involved as long as we can.

B: There is a graveyard down the road from Eilean Donan castle – it’s called Clachan Duich – every time we have a tour, and we go up to Glenelg and the castle, we go to Clachan Duich because a third of those buried there are MacRaes.

NTSUSA: Clan MacRae is part of NTSUSA’s Clan Partner Program. What motivated your Clan to join in support of the Trust’s work?

J: I feel so passionate, and Bruce does too. We both believe very strongly in preserving the history and the scenic beauty of the historical aspects of Scotland. We’re very firm believers in that because if we don’t have the people in Scotland with the funds to take care of these historical sites, they fall to ruin. It’s a joy to go to Scotland. When we set an itinerary for our Scotland tours, we always look at NTS sites and try to work around them. We’re hoping we can do a tour in 2023 and that things turn back to normal. But we believe in the National Trust for Scotland.

Bruce McRae is the President of the Clan MacRae Society of North America, and his wife Judy McRae has recently become a regional representative for Scottish Heritage USA. They are both passionate advocates for Scottish history and preservation, and valued supporters of NTSUSA. Clan MacRae is part of our Clan Partner Program, which you can learn more about at the link below. 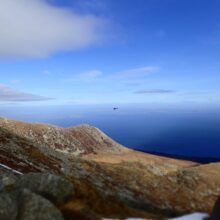 Protecting and Restoring the Natural Heritage of Arran

NTS Technical Bids Manager Joanne Mould shares an update on the progress of some of [...]