NTSUSA Executive Director Kirstin Bridier recounts her visit to the Isle of Canna earlier this year, describing the magic of the island and the activities going on at Canna to preserve the island and its heritage.

In the classic musical Brigadoon, two American tourists stumble across an enchanted village in the Scottish Highlands that appears only once every century. They fall in love with the town and its inhabitants and (spoiler alert!) one decides to stay forever.

I’d heard endless reports about the magic and charm of the remote Hebridean Isle of Canna during my six years at NTSUSA but, never having actually made it out to the island, you’ll forgive me if it took on the mythical air of Brigadoon in my mind.

In May, time and tide cooperated, and I was finally able to experience Canna for myself. My three days on the Small Isle were filled with black sand beaches and frolicking puffins, fresh-caught lobster and home-baked tea cakes, baby lambs and stone barns. I met almost all of Canna’s 16 residents (two were off island having a baby, so technically now there are seventeen who call the island home) and cooed over almost all of its 600+ sheep. I experienced sun, mist, rain, and fog within the span of two minutes. I saw the smoke-stained rooms where John Lorne Campbell and Margaret Fay Shaw curated their remarkable collection of Hebridean song and folklore.

And now I understand what all the fuss is about.

The journey to Canna

Because this was a work trip, I was lucky enough to be joined on Canna by my colleagues from the National Trust for Scotland: Ali MacLeod, Zuleika Brett, and Joanne Mould from the fundraising team, as well as Chief Operating Officer Katerina Brown and Sheona Leonard, business manager for the Highlands & Islands, who served as our guide.

Our CalMac ferry departed from Mallaig on Monday morning and, though we got drenched boarding the boat, the sun came out as we passed the Isle of Skye on our right. (That’s starboard for all of you sailors.) The ferry first made stops at Eigg and Rum, where we spotted the late Victorian pile of Kinloch Castle, before heading on to Canna. The three-hour journey gave us plenty of time to enjoy the ship’s famous CalMac and Cheese and also to look out for dolphins swimming alongside the boat.

On Canna, we were met at the dock by Canna House Manager & Archivist Fiona MacKenzie, who was heading out on the same ferry we had arrived on, as well as a welcome party from the Mackinnon family, who farm the island and own its self-catering cottages. Our group was staying on Sanday, the neighboring island that’s just a short walk away via wooden bridge, with a gorgeous view of Canna Harbour.

After giving us time to get settled and dry, the Trust’s new ranger, Catriona Patience, stopped by our immaculate cottage to take us on a walk to look for Atlantic puffins. She warned that we might not see any but, as soon as we arrived at the east end of Sanday, dozens of excited birds began chattering way, swooping from the sea stack out to sea, then back again. Beyond us, the Atlantic Ocean stretched all the way to New York.

Our walk with Catriona took us past the 19th-century St Edward’s Church, now deconsecrated and no longer in use. The Victorian Romanesque building stood out against the landscape literally and figuratively, providing a dramatic backdrop for grazing cows and sheep. (In fact, Canna and Sanday actually boast three church buildings, one of which was being prepared for a local wedding later in the summer.)

That evening, we were treated to an incredible dinner of freshly-caught lobster at Café Canna, an award-winning restaurant right on the harbor. The sun streamed in even at 8pm, and I was charmed to learn that the tiny restaurant was being run that night by two locals standing in for the regular chef, who was off island with his partner to deliver their child.

In Brigadoon, Tommy Albright and Jeff Douglas are drawn to the people that make up the magical village and, after just one day, I could see how Canna is so much more than its beauty, wildlife, and history – it is the living community that calls this small island home. The Mackinnon family, Aileen from Tighard Guest House, Catriona and the other National Trust for Scotland staff who live and work on the island, indeed everyone we met – and we met them all at a special community tea, complete with homemade treats, next to the lambing barn! – was welcoming, generous, and passionate about the Hebridean way of life. I was deeply grateful for the welcome I received on Canna, and I hope that in some small way the two new tups (male sheep) and bull named Farley that NTSUSA has gifted to the island will serve as a gesture of our thanks.

Having lived on a slightly larger island on the American side of the Atlantic for several years, I know firsthand how challenging and how rewarding island living can be. On Canna, with its one-room schoolhouse (currently not in use, for lack of students), I often felt like I was in Little House on the Prairie rather than Brigadoon. Subject to the vagaries of wind and weather and compelling residents to juggle multiple roles within their small community, living on Canna is not for the faint of heart.

But it is filled with moments of great beauty, and the Trust is committed to collaborating with the crofters and others who make Canna home to preserve the wild beauty of the island while also making it a sustainable place for their families to live and grow.

Of course, one of my main reasons for visiting the island was to see Canna House, the home of British historian John Lorne Campbell and his Pittsburgh-born wife, the photographer and filmmaker Margaret Fay Shaw.

Orphaned at age 11, Margaret was sent to school in Scotland and was exposed to Gaelic language and music there. She moved to Uist in the 1920s and lived with two sisters, Mairi and Peigi MacRae, while she learned and recorded the oral traditions of the Hebridean Islands with their help. Through this work, she met and married John, whose mother was also American. Together they purchased the island of Canna in 1938 and made their home there for the next seven decades.

Today, the National Trust for Scotland owns the island and cares for the Campbells’ home and their remarkable collection of Gaelic photographs, early audio and video recordings, and ephemera. NTSUSA has been a longtime supporter of work at Canna House and over the years has funded the cataloguing and digitization of the Campbells’ archive documenting life in the Hebrides, as well as stabilizing the building that houses it. Recently, NTSUSA has committed $600,000 to the Trust’s next phase of work on the house and garden as part of its Master Plan for Canna.

Canna House sits just up from the harbor, behind Café Canna, and is approached via an escallonia tunnel. The house, which dates to the 1860s, is surrounded by a beautifully restored walled garden that includes flower borders and an orchard of heritage fruit trees. The garden is impeccably cared for by Liz and Pete Holden, National Trust for Scotland contractors. (Pete was formerly senior ranger at the Trust’s Mar Lodge property for many years.)

When we arrived, Canna House was flying the American flag in NTSUSA’s honor. While Fiona Mackenzie could not be with us for our visit, her husband Donald (also Canna’s harbormaster) gave us a tour of John and Margaret’s home.

The house normally contains a fascinating hodge-podge of objects collected by the Campbells, ranging from their friend Compton Mackenzie’s typewriter, to pinned butterflies and moths, to historic maps and portraits, to an astonishing array of cat trinkets. Most of the contents have been carefully packed and moved to temporary storage on the island in anticipation of building works, but some iconic pieces – including Margaret’s Steinway piano – were still in situ. I was fascinated by the tin-roofed conservatory-turned-billiard room-turned-study, but perhaps my favorite discovery was the upstairs bath, with its fabulous wallpaper that Margaret had brought over from New York in the 1950s and its claustrophobic-looking steam bath cabinet.

When work on Canna House is complete, it will be interpreted to the period of the 1950s – the Campbells’ heyday on the island – and open for public tours. It will also become a resource for Gaelic scholars, who will be able to access and use the Campbells’ archive in study rooms on the second floor. Even empty, the house felt full of life and stories, and I look forward to seeing it in use once again.

For the Love of Canna

Truly, every moment of our visit felt like a dream. We walked to the centuries-old Celtic cross near A’Chill, the site of what was once Canna’s main settlement and is now just a dip in the landscape. We visited the graves of John Lorne Campbell (in a patch of bluebells; Margaret is buried on South Uist with the MacRae sisters) and a World War Two soldier who died in a nearby shipwreck. We explored the black sand beach below Coroghan barn and looked toward the remains of Coroghan Castle, built on twisted columns of geometric basalt.

Zuleika spotted a Canna mouse – a tiny wood mouse found only on the island. She and Jo went wild swimming. And I made frequent stops at the barn to check on the progress of the last few ewes waiting to have their lambs. Alas, I was not allowed to take one home with me.

At NTSUSA, we often say that there is a love story at the heart of Canna. We mean, of course, the love between Margaret Fay Shaw and John Lorne Campbell.

But my time on Canna reminded me that there also is the Campbells’ love of Gaelic culture – Margaret’s love for the MacRae sisters – the crofters’ love for the land they farm.

There is Fiona and Donald’s love of the Campbells’ collection – Catriona Patience’s love of sharing the natural world with visitors – the island’s love for their newest arrival, baby Hector.

And there is the love of NTSUSA supporters for this remote part of the world, for the beauty in its rugged landscape, for the powerful connection it provides to the past, and for the simpler way of life it seems to embody.

I am grateful to have had the opportunity to see this support in action.

To discover more about the archive and work going on at Canna House, listen to the latest edition of the National Trust for Scotland’s “Love Scotland” podcast. 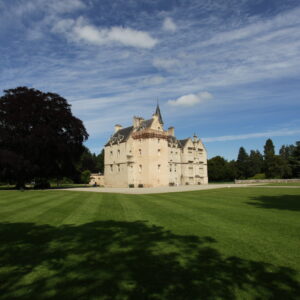 In this edition of Saltire Scholar Eilidh’s blog series, she describes her [...]