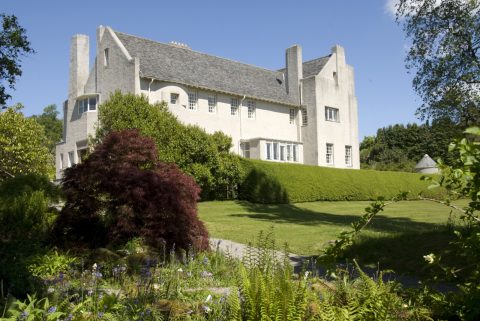 A century of driving wind and rain on the west coast of Scotland has saturated the walls of the Hill House and threatens the building’s long-term survival, including the bespoke interior finishes on which Mackintosh and his wife, artist Margaret Macdonald, collaborated.

Conservation solutions have been attempted over many years, but none have solved the problem. The National Trust for Scotland is now taking bold action to ensure that one of architecture’s greatest buildings will remain as a beacon of one of Scotland’s greatest sons.

The Trust plans to erect an enormous temporary enclosure (designed by London-based architects Carmody Groarke) over Mackintosh’s renowned building, protecting it by keeping the elements out. This will give skilled conservation teams the time needed to find long-term solutions that will ensure the building’s structural and design integrity, preserving it for future generations. The Getty Conservation Institute has provided seed funding for these conservation efforts.

“As our president Neil Oliver put it, the Hill House is in danger of ‘dissolving like an aspirin in a glass of water.’ We are building what amounts to a shield around and above the Hill House to keep wind and rain out and give the building a chance to dry.

“The structure is effectively a porous cage, albeit a beautifully designed one, that still allows some air and a degree of moisture penetration – this is essential to ensure the walls do not dry out too quickly and crumble as a result.

“While the Hill House is protected from the elements, our conservation and architectural heritage team cans start work to find solutions that will respect the historic and design integrity of the building, meet the standards and obligations required by its listed status, and ensure that this precious place will survive to inspire future generations.”

“This is a conservation project of international importance. The challenges faced by the Trust are shared with caretakers of early modern buildings worldwide. This has been recognized by the Getty Conservation Institute, which has made a grant to The Hill House through their Keeping It Modern program with the hope that lessons learned can be helpful to preservationists across the globe.

“NTSUSA is delighted to support the Trust as it works with experts to find a long-term solution. With our colleagues in Scotland, we will be launching the biggest fundraising drive in our history early in the new year. We hope that all Americans who have a love of Mackintosh’s work and appreciation of his place in architectural history will make a contribution to this innovative project.”

The Hill House was built as a family home for Scottish publisher Walter Blackie between 1902 and 1904. Mackintosh was determined to give his client a “home for the future,” dispensing with fussy Victorian-style detailing in favor of a shockingly abstract exterior.

Mackintosh made use of a new material – Portland cement – to produce a smooth layer of render on the exterior of the building. While this achieved the abstract visual effect he desired, the experimental finish has allowed extensive moisture ingress since the day it was first applied. 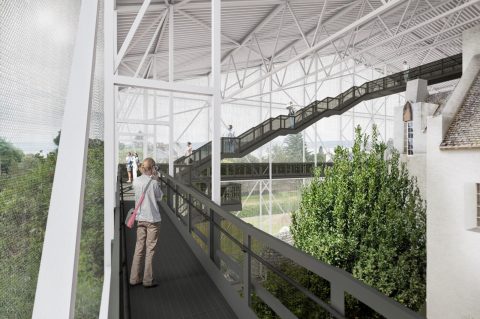 The structure would allow visitors to get a whole new perspective of the Hill House.

The protective enclosure, which is likely to be in place for six years, will cost in the region of $6 million. Skinner added:

“The beauty of the protective structure’s design is that it will allow us to keep the Hill House open to the public while our conservation teams are at work restoring the building to its original condition, and, in fact, it will become accessible to them like never before.

“Within the enclosure, visitors will be able to climb stairs and gangways for a bird’s eye view of Mackintosh’s masterpiece and get up close and personal to the genius of his design.

“As a bonus, visitors can watch the restoration work as it progresses and then turn around to enjoy stunning views out over the Firth of Clyde.”

Charles Rennie Mackintosh, the son of a police superintendent, was born in Glasgow on June 7, 1868. He enrolled at Glasgow School of Art in 1884. After completing his apprenticeship in 1890, he met his future wife Margaret Macdonald, her sister Frances and, together with his friend, Herbert McNair, they became known as “The Four” who created the “Glasgow Style” of architecture and interior design.

In 1902, the publisher Walter Blackie purchased a plot of land at the top of a hill in Helensburgh for which he planned a new home with views over the Gareloch and the Firth of Clyde. Blackie already had an interest in the Glasgow Style and Mackintosh was recommended to him. Mackintosh was heavily influenced by the traditional plain style of historic Scottish towns and villages and disliked the then current vogue in architecture which copied Tudor, Gothic and Classical detailing.  It was a meeting of minds with Blackie. At a cost of £5,000 ($6,700), Mackintosh, along with his wife Margaret Macdonald, oversaw the design and construction of every detail of the Hill House, which was completed in 1904.

The Hill House proved to be incredibly influential in Europe, inspiring Le Corbusier and the German Bauhaus movement, which in turn inspired much mid-late 20th century architecture. A contemporary of Frank Lloyd Wright, Mackintosh shared that architect’s commitment to unifying interior and exterior as a total work of art. Both architects worked in industrial cities (Glasgow and Chicago) that allowed them to experiment with materials like concrete and steel.

The National Trust for Scotland Foundation USA is a community of like-minded Americans committed to protecting the rich cultural heritage and unspoiled natural beauty of Scotland. Since 2000, the Foundation has provided more than $8.5 million in funding to preserve the irreplaceable treasures under the Trust’s care for the benefit of future generations. Donations to The National Trust for Scotland Foundation USA, a registered 501(c)(3) non-profit organization, are tax-deductible to the fullest extent allowed by law.

The National Trust for Scotland was founded in 1931 to harness the energies of the people of Scotland in helping to conserve the country’s history and its natural, built, and cultural heritage. It has since grown to be Scotland’s largest conservation movement and membership organization, with more than 350,000 members. On behalf of the nation, the

Carmody Groarke is a London-based architectural studio of 40 staff established by Kevin Carmody and Andy Groarke in 2006. Since its formation the practice has gained a strong reputation for working internationally on a wide range of arts, cultural, heritage and residential projects, both new build and within the context of historic buildings. Completed projects include the new Architecture Gallery at the Grade II* listed RIBA headquarters, the permanent memorial to the 7 July London bombings in Hyde Park, Frieze (London) Art Fair 2011-2013, Maggie’s Cancer Care Centre, Clatterbridge, Merseyside, a workshop for sculptor Antony Gormley and a contemporary gallery for White Cube at Glyndebourne. Current projects include a new build Museum on the shores of Lake Windermere in the Lake District National Park, major renovations for of the Dorset County Museum in Dorchester, and a 19-storey hotel tower in Westminster. 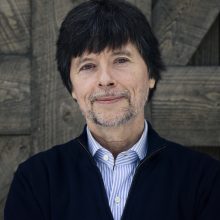 Ken Burns to be honored at 10th annual gala

Documentary filmmaker Ken Burns will be honored with the Great Scot Award at the 10th [...]