The festive occasion has celebrated Scottish heritage, from poetry and dancing to whisky and haggis, for more than a decade. Guests were welcomed by a bagpiper and cocktail hour included tastings by The Macallan, the official whisky of NTS USA, with music by Katie McNally & Friends. A silent auction featured items from Scottish fashion designer Christopher Kane, contemporary artist Jim Lambie, and a miniature statuette of The Kelpies by Hamilton & Inches, silversmiths to Her Majesty The Queen.

The evening’s décor was inspired by the landscape around Culzean (pronounced kuh-LANE) Castle, a Robert Adam-designed country estate in Ayrshire, Scotland, which features a variety of subtropical plants, thanks to the nourishment of the passing Gulf Stream. The top floor of Culzean Castle famously was presented to General Dwight D. Eisenhower in thanks for his service to the people of Britain during World War II. Eisenhower stayed at the castle during his time as president of the United States, earning it the nickname of the “Scottish White House.” Proceeds from this year’s A Celebration of Scotland’s Treasures will go toward the restoration of the fountain court at Culzean, now cared for by the National Trust for Scotland.

The presentation of the Great Scot Award is the highlight of NTS USA’s annual celebration, and Mr. Roberts introduced Mr. Scott as a “figurative rebel.” The sculptor works in steel and bronze, combining figurative and equine themes with contemporary techniques to create stunning landmark artworks. A graduate of Glasgow School of Art, Mr. Scott now works from his studio in Philadelphia, Pennsyvania, where he creates prominent public artworks for private, corporate, and civic clients around the world.

His most prominent project to date is The Kelpies, which have become the best known public artworks in Scotland welcoming millions of visitors to the small town of Falkirk since their inauguration. The two 100-foot high steel horse heads are the largest equine sculptures in the world and straddle the Forth & Clyde Canal. They are inspired by Scottish mythology and by the heritage of the Clydesdale horses, the original source of locomotion for the canal barges and the power behind the industries and agriculture of central Scotland.

Accepting the award, Mr. Scott shared how moved he was by the public’s reaction to The Kelpies and acknowledged the team that helps him assemble these large-scale installations, and especially the contributions of his wife, the architect Hanneke Scott-van Wel.

When I was a student at Glasgow School of Art in the early 80’s, the school leased a hostel in the grounds of Culzean Castle. It was used as a study base for us students to draw and work from nature.  We all absolutely loved it.  I ended up going three times, which was quite unusual and at one time even set about building huge sculpture pieces on the shore with my fellow students from driftwood and assorted stones and other natural materials.

During my visits there I did many drawings of the castle itself and of course the fountain and its beautiful setting in front of the main building.  Inevitably these have been lost in the mists of time, but the building and its surroundings hold a very special place in my memories of my days at GSA.

It’s therefore very serendipitous and particularly rewarding to be involved with NTS all these years later, as it endeavors to restore this striking feature at one of Scotland’s architectural treasures.

-Andy Scott, when asked about his memories of the property to benefit from the fundraising gala.

Kirstin Bridier, NTS USA executive director, thanked all for their passionate support of Scotland’s treasures, in particular two properties; Culzean Castle and Hill House. She took the opportunity to announce that we have been challenged by Kennedy Park Richardson to raise $25,000 to support the restoration of the fountain court at Culzean Castle. His ancestors were members of Clan Kennedy upon whose clan lands the Culzean estate is built. If we’re successful, he will match that amount dollar-for-dollar, allowing the National Trust for Scotland to move forward with its plan to bring this magnificent fountain back to life.

Another highlight was a message from Scottish archaeologist, historian, broadcaster, and National Trust for Scotland President Neil Oliver. Mr. Oliver expressed his thanks to attendees of the previous year’s gala, which raised funds for a groundbreaking conservation initiative at Scottish architect Charles Rennie Mackintosh’s masterpiece Hill House. Mr. Oliver shared footage of the work they had made possible, inviting all gathered to visit the property once The Box (its temporary protective superstructure) is completed in June 2019 – assuring everyone that it does not always rain in Scotland.

The evening culminated with the live auction and Scottish country dancing. Alasdair Nichol, chairman and co-owner of Freeman’s and a popular appraiser on PBS’s Antiques Roadshow, charmed over 200 guests with a rousing live auction including luxury Scottish vacation packages donated by the National Trust for Scotland, Edinburgh’s premier hotel, The Balmoral, and bronze studies for The Kelpies donated by the artist. Bidding for the opportunity to name a Highland coo, Shetland cow, or goat for Culloden Battlefield was spirited as the auction concluded. The livestock will graze at Culloden Battlefield, providing a sustainable model for landscape management. 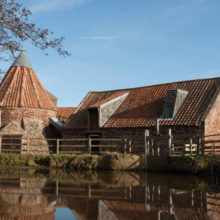 We have partnered with NTS on an international campaign that will raise funds to save [...]