We are delighted to team up with with NTS to launch an international campaign to save the mill that was featured as as the backdrop to the fictional Lallybroch where STARZ’s hit series Outlander filmed many of its most memorable scenes.

Located on the banks of the River Tyne in East Linton, Preston Mill was one of the region’s last working grain mills, being used commercially until 1959. The eighteenth-century mill is now in need of urgent help to repair its water wheel after the mechanism which allows it to turn broke over the winter months, causing it to jam in a fixed position.

The enormous popularity of Outlander in the United States inspired NTSUSA to collaborate with NTS to raise funds on both sides of the pond for the iconic mill. Thanks to the generosity of a Nantucket, Massachusetts based American donor, Barbara Beinecke Spitler, all donations to repair the mill will be matched dollar-for-dollar, up to $5,000. As a fan of Diana Gabaldon’s Outlander book series and a philanthropist of historic preservation, Beinecke Spitler saw the donation as the perfect marriage of her two interests. With $15,000 required to undertake the repairs, NTS and NTSUSA have each launched social media-based crowdfunder campaigns to ask Outlander fans to help raise the funds needed to restore the wheel to its former glory.

“Those who visit Preston Mill can follow in Jamie Fraser’s footsteps as well as seeing and hearing the mill in action while learning about the millers who worked there – it would be a real loss to us, the public and Scotland if we weren’t able to restore it to working order.

“We need to do all that we can to protect the places that inspire our love of Scotland, and Preston Mill is one of those places.”

With its curious Dutch-style conical roof, Preston Mill is an architectural oddity that beguiles visitors and transports them back in time. In 2014, it hosted the cast and crew of the STARZ series Outlander as they filmed some of the first season’s most pivotal scenes and used the mill as a stand-in for Lallybroch, Jamie Fraser’s (played by Sam Heughan) family home.

To get the wheel turning again, engineers will restore the masonry pillar – which the wheel sits upon – and replace the timber bearing and metal bushes – which houses the wheel’s axle and hold it in place, allowing the wheel to turn. Repairs will begin in early spring and is targeted for completion by April, just in time for the property’s seasonal reopening.

With your help, for the love of Scotland …

With the help of Outlander fans around the globe, the necessary funds to repair the Mill’s water wheel were raised in just a couple short weeks. Many thanks to everyone who contributed! Without support from people like you we would be unable to care for the places that mean so much to us. Thank you!

Watch The Latest section of our website and our social media pages for progress updates at Preston Mill. To learn about other ways that you can help protect Scotland’s heritage click here. 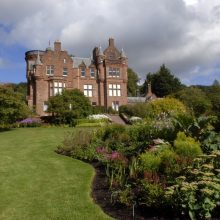 Press Release: “Garden of Contemplation” Given to Honor People of Lockerbie

The garden will be formally dedicated on Saturday, December 22, to coincide with the [...]