Members and friends of NTSUSA are cordially invited to join The American-Scottish Foundation
in association with The American Patrons of the National Library and Galleries of Scotland on Thursday, October 21st at 7 PM via Zoom for Bringing the Bards Home, a #ScotsinUS conversation on the rare and important Scottish manuscripts which the National Library, together with the National Trust for Scotland and Abbotsford (the home of Sir Walter Scott), intend to acquire for the nation.

Program is free, registration required. Follow the link below to RSVP.

The remarkable Honresfield Library – a private collection almost entirely inaccessible to scholars and the general public since the 1930s – has come up for auction at Sotheby’s. Many of the works in the library are of deep significance to Scotland’s literary and cultural history, including significant manuscripts by Robert Burns and Sir Walter Scott, and the opportunity to secure such treasures for the nation is extremely rare.

A consortium of heritage organizations, along with authors’ houses, museums, and libraries, have joined forces with the express purpose of saving the collection for the United Kingdom. The American Patrons of the National Library and Galleries of Scotland is leading the campaign in North America and is calling on all those with a love and passion for Scotland, its culture, and heritage to pledge their support. Members and friends of NTSUSA are cordially invited to attend the conversation where we will learn more about this remarkable library and how we can bring the Bards home.

Donations to the campaign are 100% tax-deductible. Show your support by making a gift today.

A virtual program by The American-Scottish Foundation in association with The American Patrons of the National Library and Galleries of Scotland. 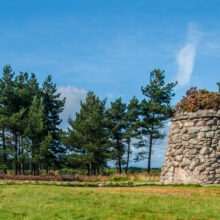 Culloden and Canna will feature in two programs organized by The National Trust for [...]