Pedaling to Save Our Scotland

George Russell has completed his epic cycle across America from California to Florida to raise funds for the National Trust for Scotland.

Colorado resident George Russell (74) has completed a 3,000+ mile cycle across the United States and has so far raised a massive $50,000 for conservation charity the National Trust for Scotland.

Completing his coast-to-coast journey one day ahead of schedule, George arrived in St Augustine, Florida on Wednesday, October 14, just 49 days after setting off from San Diego, California. Family, friends and colleagues from Scotland to America came together to congratulate George virtually with a video compilation.

From the Pacific coast to the Atlantic, George overcame challenging terrain and steep inclines as well as strong winds and even hurricane warnings – but took everything in his stride and had continued support from his wife Mary, who drove a support vehicle with him.

Born in Edinburgh, Scotland, George is now based in Colorado. With strong ties to the National Trust for Scotland, this was a very personal journey for the cyclist – his grandfather was the charity’s first Secretary and Treasurer and was key in negotiating the purchase of Glencoe to be held in trust for future generations. His father also worked for the Trust for many years.

George’s support for the charity was in response to a major international fundraising campaign – Save Our Scotland – launched to protect Scotland’s historic and natural treasures after lockdown measures due to the coronavirus crisis put the charity into an extremely challenging financial period.

George said: ‘I can’t quite believe I’ve finished – and that I only had to repair two flat tires on the way! There were so many moments where we had to rethink our route after seeing poor weather forecasts, but more often than not the sun shone for us and it has been an amazing experience.’

Crossing eight US states on two wheels has been a totally eye-opening and a liberating journey and I never lost sight of the reason for it all. I was constantly reminded of Scotland and Trust-owned places like Glencoe and Ben Lawers when I was on the mountain paths and I’m proud that I’ve achieved this – not only for myself, but for my father and grandfather and everyone in Scotland that cherishes its heritage.

Russell also expressed gratitude to his supporters, saying: “The messages of support that I received along the way were what really kept me going and I’d like to thank everyone that reached out and made a donation.”

Kirstin Bridier, who directs The National Trust for Scotland Foundation USA, said: “I am inspired by George’s epic journey – in awe of his physical effort and grateful for his commitment to helping the National Trust for Scotland weather the financial challenges brought about by the coronavirus pandemic. George connected individuals across the US and UK with the Trust’s conservation mission through his cycle, and we cannot thank him enough for his vision and generosity.”

George’s fundraising page is still live and those in the USA who would like to congratulate him by contributing to his campaign can visit our Fundly page to make a tax-deductible gift.

If you live in the UK, please donate at his JustGiving page. 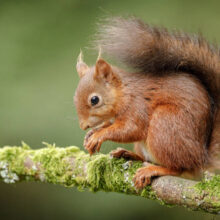 We’re famous for stately homes and historic buildings. But we do so much more than [...]