We’re famous for stately homes and historic buildings. But we do so much more than that. Here are just 10 ways we protect Scotland’s heritage and boost local communities every day.

Highland cows help to keep the battlefield at Culloden under control

If nature was allowed to take its course, the battlefield at Culloden would look very different. We work hard to control the relentless growth of self-seeded trees on the site, and get invaluable help to do so from grazing animals – Shetland cows, Highland cows and goats – to do so, which allows us to cut our use of machinery and chemicals to a minimum. ‘You might not realize that the heather moorland associated with Culloden actually needs constant management’, explains operations manager Raoul Curtis-Machin, ‘but without it, trees would take over and obscure the battlefield’.

The Canna Harbormaster at work.

On Canna and Fair Isle, the Trust’s role in sustaining local communities was thrown into sharp relief during the coronavirus lockdown. ‘The Trust is responsible for the aerodrome on Fair Isle, providing access for locals and visitors, and which has become a lifeline service’, explains Clea Warner. ‘Canna has a population of 16 and a working farm with 40 cattle and 600 sheep. We look after the island, including its harbour, where we also employ the harbourmaster. Getting supplies to the small community is vital work.’

The Benedictine abbey on Iona

Iona is a uniquely special and spiritual place, and our work here helps the island to flourish. As well as monitoring plant life and seabirds and encouraging traditional crofting techniques, we support the community by helping to facilitate important projects such as the new village hall and fire station. ‘We’re also involved in ongoing maintenance – repairing old stone walls, footpaths and drainage ditches and clearing invasive species’, says Clea Warner, general manager for the Highlands & Islands. ‘Shared areas of the island could quickly fall into poor condition without our contribution.’

With 245 miles of upland paths in our care, it’s a massive job keeping them in good shape. ‘If we didn’t maintain and restore the path network, it would soon deteriorate’, says upland path manager Bob Brown. ‘The erosive power of the Scottish weather combined with visitor pressure would result in habitat loss and the visual scarring of our wildest places.’ Our team of four work 10-hour days all year round to keep the mountains beautiful.

Craigievar Castle is one of the best examples of a 17th-century tower house in Scotland. A decade ago, we removed the cement render on the walls – the cement was stopping the castle ‘breathing’ and the resulting dampness was damaging the ornate plaster ceilings inside. Traditional lime harling in Craigievar’s historical pink colour was put on in its place. ‘Repairs to the harling were due this year, particularly to areas where water can penetrate the building’, says James Henderson, operations manager for Aberdeenshire South. ‘We were also going to give it a new limewash to maintain its unique colour. But a loss of capital budget means we can’t carry out this work, which will impact massively on the conservation of this key piece of our built heritage.’

Trust archaeologists and volunteers regularly uncover fascinating clues to Scotland’s history. Recent fieldwork at Threave has unearthed flints from ploughed fields, suggesting Neolithic and Bronze Age activity. Other finds include limekilns on Arran and a prehistoric settlement on Unst in Shetland. ‘Our archaeologists gather information about how our properties have changed over time, helping us to tell their complex histories. Teasing out these stories is a long-term commitment’, says Derek Alexander, head of archaeological services.

The Trust has the most extensive Robert Burns collection in the world. Among the most treasured items are two first edition copies of his Poems, Chiefly in the Scottish Dialect, commonly known as the Kilmarnock Edition. One of these is in the unbound state it would have arrived in from the printers in 1786 – the only known such example in existence. We have carried out meticulous conservation work on the fragile volume to preserve it for the nation.

8. Roping Up to Rare Plants

With the climate emergency forcing alpine plants to move ever higher up our hills in search of the ideal growing conditions, scaling the heights to get a better understanding of plant life is now essential work for our countryside experts. Some have received specialist rope training so they can reach previously inaccessible areas. ‘I monitor a number of rare plants at Glencoe National Nature Reserve, but I’m sure there’s much to be discovered in even more remote locations’, says ecologist Dan Watson. ‘At the botanically rich Creag an Lochain at Ben Lawers NNR, for example, much of the ground is inaccessible.’

The aviary at Culzean Castle

Culzean has provided unforgettable days out for generations of families, both in its castle and its incredible grounds – those 260 hectares of woods and formal gardens, plus 3 miles of coastline, became Scotland’s first country park in 1969. But most visitors are probably unaware that Culzean, like so many of our properties, is also a sanctuary for wildlife. ‘Our team is involved in the long-term monitoring of fulmars, warblers and bats’, says Gareth Clingan, Culzean’s operations manager. ‘The results feed into site-specific projects as well as into regional and national monitoring schemes.’ The data goes back a remarkable 45 years and is an invaluable conservation resource.

When red squirrels were reintroduced to the north-west Highlands in 2017, the diverse woodlands of our Balmacara Estate and Inverewe proved the ideal home for these iconic creatures. We worked with Trees for Life to identify the right locations, assisted with the squirrels’ release and supplied food while they settled in. ‘Our traditional croft management scheme supports rotational cropping and the grazing of cattle instead of sheep’, explains Balmacara property manager Iain Turnbull. ‘The result is that we have this wonderful woodland habitat.’

For the Love of Scotland

These are just 10 ways we protect Scotland’s heritage behind-the-scenes every day. We need your support more than ever to continue our work. Americans can help by making a tax-deductible gift to The National Trust for Scotland Foundation USA. 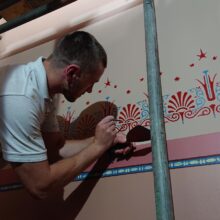 Traditional Methods for the Modern Era

The restoration of Holmwood's original designs is both a celebration of 'Greek' [...]