17 April, New York City – The National Trust for Scotland Foundation USA’s (NTS USA) annual gala, A Celebration of Scotland’s Treasures, drew international philanthropists and conservationists to New York’s Metropolitan Club on 12 April. NTS USA honored two “Great Scots,” endurance athlete, broadcaster and philanthropist Mark Beaumont BEM and architect Charles Rennie Mackintosh whose 150th anniversary is being celebrated this year. Rounding out National Architecture Week, the event raised nearly $400,000, proceeds support the work of The National Trust for Scotland including the urgent conservation effort to save Charles Rennie Mackintosh’s iconic Hill House. Helen Sayles CBE, chairman of the board of The National Trust for Scotland Foundation USA, presented Mr. Beaumont with the 2018 Great Scot Award. It is presented annually to a Scot or American who has contributed to the countries’ shared heritage. Past recipients include Ken Burns, Sir Billy Connolly, Phyllis Logan, the Duke of Buccleuch and Queensberry, and Alexander McCall Smith. 2009 and 2010 “Great Scots” Alan Cumming and Christopher Forbes were in attendance.

The festive occasion has celebrated Scottish heritage, from poetry and dancing to whisky and haggis, for more than a decade. Guests were welcomed by a bagpiper and cocktail hour included tastings by The Macallan and Snow Leopard Vodka with music by Katie McNally and Friends. The evening décor was inspired by Hill House and made possible by Scottish home furnishings, textiles, stoneware, and fashion company ANTA. Ode to A Haggis was enthusiastically recited by auctioneer for the evening, Alasdair Nichol, Freeman’s Chairman and popular appraiser on PBS’ Antiques Roadshow. This year’s gala was co-chaired by Naoma Tate and M. Victoria Cummock.

The presentation of the Great Scot Award is the highlight of the Foundation’s annual gala. Ms. Sayles shared, “Mark Beaumont inspires Scots and Americans by pushing the limits of what is possible both physically and mentally. In addition to his extraordinary 18,000-mile journey last year, Mark is a philanthropist who cares deeply about the development of young people in Scotland and around the world.” Accepting the award, Mr. Beaumont thanked the NTS USA for the “wonderful touch” when they surprised him by flying in his mother, Una Beaumont, sharing that “family has been at the heart of everything I do.”  Mr. Beaumont continued with recollections of his personal and professional trips to North America. On his first visit as an 18-year-old, he experienced the unlikely feeling of being a “celebrity for a day in New York” when he happened upon the Tartan Day parade and “nipped back to the hotel to grab my kilt because we always have a kilt with us!” Mr. Beaumont, who hails from Dundee, first cycled across Scotland at the age of 12 and last year cycled around the world in less than 79 days. He acknowledged his cycling team of 40 for the recent success of ‘Around the World in 80 Days’ challenge and recognized his family and guests in the room for their support because “without their support my achievements would not have been possible.” The award presentation concluded with a standing ovation for Mr. Beaumont.

The evening culminated with the live auction and Scottish country dancing. Mr. Nichol charmed the almost 300 guests with a rousing live auction including Scottish vacation packages by land and sea from a cottage overlooking the Isle of Sky to the Cairngorms National Forest and the Southern Coast of Ayrshire. The highlight of the live auction was artist Andy Scott who donated bronze maquettes of his internationally recognized public work of art The Kelpies (right). Mr. Scott addressed the audience and shared that as a Glasgow School of Art alumni, he donated his sculpture to help benefit the fundraising to conserve Mackintosh’s architectural masterpiece the Hill House. The spirited bidding opened at $2,000 and escalated to $22,000 before the hammer fell. In honor of Mackintosh’s 150th birthday, the auction concluded with the launch of the Foundation’s “150 for 150” appeal in support of Hill House. NTS USA’s goal is to secure 150 donations of (at least) $150 which would be matched dollar for dollar. The room delivered and donations reached over $30,000. Guests’ high spirits continued onto the dance floor where they enjoyed music performed by Katie McNally and Friends, Scottish Country dancing and a full-blown cèilidh led by Nan Chisholm and Christopher Gow. In true Scottish fashion, the evening concluded with all joining in singing Robert Burns’ Auld Lang Syne. 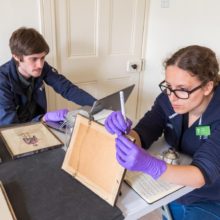 Read all about the progress of the Project Reveal teams, who have been busy [...]