Join The National Trust for Scotland Foundation USA, the British American Business Council of New England, and many other collaborating organizations on October 3rd for an evening of comradeship as we prepare to celebrate the Plymouth 400 historical anniversary.

A special evening at Samuel Adams Boston Brewery, one of the oldest breweries in the US, named after one of the founding fathers.

America is poised for an anniversary of national and international significance; the 400th anniversary of the Mayflower voyage and the founding of Plymouth Colony. The Plymouth 400 Anniversary will highlight the cultural contributions and American traditions that began with the interaction of the Wampanoag and English peoples, a story that significantly shaped the building of America.

Michele M.Pecoraro brings years of tourism, marketing, and leadership experience to the helm of Plymouth 400, Inc., the organization formed to lead the planning and execution of programs and events commemorating the 400th anniversary of the 1620 Mayflower voyage and the settlement of Plymouth Colony; America’s founding story. Michele’s education and business background, knowledge of the tourism industry and connections with industry leaders and legislators have helped her increase awareness and engagement for Plymouth 400 at the regional, national, and international levels.

RSVP by September 27. $35 for 2019 members of collaborating associations. $40 for non-members.
Please list National Trust for Scotland in the ” Your Name Tag Display” box of the RSVP form. 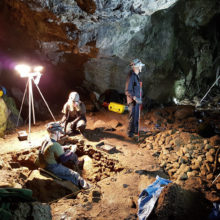 Discover the vital role archaeology plays in uncovering Scottish history as we take a [...]