Rugged Beauty: The Gardens of Ayrshire, Arran, and Argyll

Sitting at my desk in Boston in the midst of a summer heatwave, I’m feeling nostalgic for NTSUSA’s May 2022 tour of the gardens of Ayrshire, Arran, and Argyll. While I know the sun did shine on at least a few of our days of exploring Scotland’s west coast, my enduring memories of our trip are of riotous azaleas and rhododendrons bursting brightly against misty gray skies. Scotland’s changeable weather provided the perfect backdrop for the gorgeous gardens of this wild and rugged part of the country.

Scotland’s Glorious West Coast Gardens was the first of three garden-focused tours NTSUSA has planned for 2022 and 2023 with the help of Patrick Scott, co-founder of Discover Scottish Gardens. Our itinerary combined behind-the-scenes access to National Trust for Scotland properties and garden staff with visits to private gardens, delicious food, and wonderful company.

We began our tour with a private reception at The Georgian House, the Trust’s flagship property on Charlotte Square in Edinburgh, where our group was warmly welcomed by National Trust for Scotland Chief Executive Phil Long OBE. It felt as if we had stepped back in time as we toured the elegant and meticulously restored Robert Adam-designed townhouse.

David Mitchell, the Trust’s deputy chair and former curator of the Royal Botanic Garden Edinburgh, was on hand to provide context for our week’s-worth of visits. (David began his forty-year career in horticulture at the Trust, first as an apprentice at Threave Estate and later heading up Inverewe Garden.) He reflected that the past two years have forced us to reset the clock on our personal lives and relationship with nature. This has included a revaluation of the importance of gardens and green space in our daily lives.

Simply put, “People need gardens and gardens need people. We are all – unwittingly, willingly or not – in a symbiotic relationship with woodlands, parks, and gardens, be that for food, leisure, or learning.”

(David also noted that we would be seeing many “significant and venerable champion trees, all of which deserve a hug. Do provide them with one, I do it frequently – it makes you feel good!” I am happy to say our group complied.)

The next morning we set off for Ayrshire and Dumfries House, the extraordinary Georgian estate rescued by HRH The Prince Charles, Duke of Rothesay in 2007, just hours before its contents were set to go up for auction. Under the auspices of The Princes Foundation, today Dumfries House and Estate provides training opportunities for young people and traditional arts and crafts.

Even the damp day couldn’t contain the beauty of the grounds. Head Guide Alec MacDonald led us on a woodland walk through the Rothesay Gardens, past a hedgerow maze and across the Avenue Bridge to the Arboretum, pointing out the many follies and summer houses that have been designed and built by apprentices in the estate’s building arts and crafts training program. The Woodland Adventure Playground was a particular hit with our group, who braved the rain-soaked bridges and platforms with enthusiasm and (fortunately) no injuries.

In the Queen Elizabeth Walled Garden, Head of Gardens Melissa Simpson shared her plans for the five-acre space. Our group was intrigued by the use of seaweed mulch; a highlight of the garden for me was the sycamore tree that dates to 1599 and stands sentinel over the plantings below.

Our day ended with a very special evening tour of the Adam-designed Dumfries House, followed by dinner in the Great Steward’s Dining Room. It was incredible to see the collection of Chippendale and Georgian Scottish furniture. I particularly loved the “Etruscan” Wedgewood creamware dinner set in the Pink Dining Room – so modern! – and the eight longcase clocks in the Entrance Hall that chimed as we sipped champagne. The Chippendale bookcase in the Blue Drawing Room – considered the masterpiece of the collection – still has a tag from Christie’s auction house attached to its key, a reminder of how close these treasures came to being split up and sold.

Up early the next day, the sun came out as we rode the CalMac ferry across the Firth of Clyde to the Isle of Arran. After a delicious lunch of soup and sandwiches at Brodick Castle’s Woodland Café, we met Tim Keyworth, the Trust’s gardens and designed landscape manager for Ayrshire and Arran, and the team at Brodick Castle, Garden and Country Park for a walk through some of the estate’s 74 acres of walled and woodland gardens.

I had last been to Brodick more than five years ago, and I was absolutely delighted by the progress that has been made in the gardens – in part due to the support of generous American donors like the Manitou Foundation. Fruit trees, a nod to the garden’s productive past, have recently been introduced to the walled garden and will soon be accompanied by contemporary sculptures of apples and peaches. One of my favorite vistas was looking up toward the castle across beds of purple catmint – a wonderful alternative to lavender.

We learned that it’s unusual for a walled garden (Brodick’s dates to 1710) to be situated so close to the castle itself. At Dumfries House, for example, the walled garden was moved far from the manor house to mitigate smells and the sight of people working. The Trust’s designed landscape team must balance its interpretation of this early use of the garden with its Victorian redesign as a pleasure garden and, later, a showcase for exotic plants hunted from around the world.

With a unique micro-climate courtesy of the Gulf Stream, the gardens at Brodick are among the warmest in Scotland. Rare frosts mean it is an ideal location for growing unusual plants and, in the early 20th century, the Duchess of Montrose planted specimens collected by George Forrest and Frank Kingdon-Ward in far-flung locales like China and Burma. As we wandered through the large rhododendron walk, I barely recognized it from my previous visit. So many invasive plans have been cut away – it was an entirely new experience! Among the group’s favorite varietals were Rhododendron maddenii; Rhododendron ‘Fortune’, and the fragrant Yellow Azalea. Of course, the Bavarian Summerhouse was a magical discovery amidst the lush foliage.

The next day, in Tarbert, it seemed as if we felt every one of the 90 inches of rain that falls annually in Argyll. This didn’t dampen (pun intended) our enthusiasm for the Secret Garden of Baravalla, a private woodland landscape curated by 20th-century plant hunters Sir Peter Hutchinson and Peter Cox and open by invitation only. The two Peters met in 1960 and travelled together to Nepal, India, and China, where they discovered and introduced rhododendron species to the west of Scotland. Even in the rain – perhaps especially in the rain – walking through the Secret Garden of Barvalla felt very special and magical.

Our next few days in Argyll, the historic home of Clan Campbell, were based at the Loch Melfort Hotel adjacent to the Trust’s Arduaine Garden. With a view onto the sea loch and the resident Highland coos, the setting was so inviting that one of our group even did a little wild swimming!

Arduaine (pronounced Ar-DOO-nee) is currently closed to the public due to storm damage and ongoing work to remove Japanese larch. Our group was treated to a special tour with the Trust’s Gardens and Designed Landscapes Manger, South and West, Simon Jones and Gregor Anderson, Arduaine’s head gardener. They highlighted the treasures of the garden (including a fern that may be 1,000 years old), its spectacular setting on a rocky promontory overlooking the Sound of Jura, and the extraordinary work the Trust has been doing to fight back against the ravages of fungal pathogens and climate change. This has included the removal of nearly 1,000 Japanese larch by a team of just three staff – with only 20 trees left to go.

Another highlight was our visit to Ardmaddy Estate. Owner Minette Struthers led us around her rhododendron-filled walled garden, which sits at the foot of a 15th-century tower house and on the site of a barracks dating to the 1745 Jacobite Rising. Minette has transformed the landscape with a woodland path and water gardens. She and her husband graciously invited our group to join them for lunch at their home overlooking the Firth of Lorne, where I experienced Coronation Pheasant for the first time!

And our visit to Inverary felt like something out of a fairytale – or at least a BBC mini-series. The grey-green Gothic Revival castle, seat of Clan Campbell and home to the Duke and Duchess of Argyll, is surrounded by two acres of formal gardens. Incredibly, they are maintained by only two gardeners. We toured the grounds with one of them, walking through the bluebells down to the edge of Loch Fyne.

At another National Trust for Scotland property, Crarae Garden, we might have been in the Himalayas – hiking alongside a rocky gorge, traipsing across wooden bridges, and passing scenic waterfalls. At one point we were completely surrounded by bamboo; at another, we marveled at forests of southern beech, maples, mountain ash, and sequoia. In fact, there are 136 champion trees on the property.

Just like Brodick and Baravalla, rhododendrons and other shrubs and trees were brought to this garden from China, Nepal, and Tibet by a plant hunter – in this case, Reginald Farrer, who traversed the gorge to place the plants exactly where he felt they should be. Unfortunately, the effects of climate change mean the burn that forms the heart of this tranquil landscape is threatening visitors’ ability to enjoy the garden. Just this week, news came from the Trust that torrential rains had caused the burn to overflow, making the garden paths unsafe and inaccessible. Simon Jones and the team at the Trust must consider how to address these recurring problems for the benefit of visitors and for the integrity of the historic designed landscape in their care.

The Tour Group at Crarae Gardens

To Glasgow, with New Friends

After a week spent in wellies and raincoats, it felt strange to find ourselves back in the city – Glasgow – for a farewell dinner at the uber-glamorous Kimpton Blythswood Square Hotel. While the gardens were indeed glorious, what really made the experience wonderful for me were my fellow travelers, who hailed from all across the country, had different experiences and interests, and came together with a sincere love of gardening and curiosity about the west coast of Scotland. I look forward to staying in touch and to seeing how Scotland’s gardens have influenced their own personal landscapes. In fact, I hear a monkey puzzle tree (Araucaria Araucana) has already been purchased for a garden outside of Boston…

In September, Paddy Scott will lead another group of NTSUSA supporters on a tour of the gardens of Perthshire, Kinross, and Fife, and in September 2023 we’ll explore the gardens of Aberdeenshire. I am looking forward to expanding my understanding of designed landscapes – I am an architectural historian, after all – but for right now, my heart is in the romantic, rugged gardens of Scotland’s west coast. 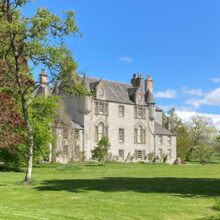 An Afternoon at Leith Hall and House of Dun

Saltire Scholar Eilidh shares her experience visiting the grounds and gardens of [...]