News from the Isle of Canna

The Isle of Canna, a small and beloved island in the Inner Hebrides, was donated to the National Trust for Scotland in 1981 by Gaelic scholar Dr. John Lorne Campbell and his American wife Margaret Fay Shaw, along with Canna House and its extensive archive. Dr. Campbell purchased Canna in 1938, and together with Margaret built a collection of papers, photographs, audio recordings, and publications that celebrate Gaelic culture.

The island has a fascinating history and is thought to have been inhabited from 5000 BC. There are over 1,000 sites of historical interest recorded on Canna, with archaeological evidence of Christianity on the island as early as the 7th century. Just as rich is the abundance of wild flora found across the island – at this time of year you can expect to see a profusion of wild garlic followed by carpets of bluebells. It is also a mecca for wildlife, including porpoises, whales, puffins, golden and sea eagles. Over 20,000 breeding seabirds are supported by the island, which is particularly impressive given that it is only 4 ½ miles long by 1 mile wide.

Seabirds on the Isle of Canna

American donors like Anne Hubbard, her late husband, Tom Hubbard, and Jeannie Becton have generously supported the Trust’s work to preserve the cultural heritage of Canna and the important collection amassed by Campbell and Shaw. We are very grateful to all NTSUSA donors whose generous contributions help to ensure that this unique place and its history will be preserved for future generations.

On the Isle of Canna, Inner Hebrides, Scotland

Canna House was in the midst of major renovations in preparation for reopening to the public next year. The Trust and the community are eager to share the achievements of John and Margaret and their internationally significant collection with visitors and researchers. Unfortunately, due to Covid-19 and the necessary restrictions on travel and construction, the completion of the restoration of Canna House and garden has been delayed by a year. The Trust now anticipates a reopening in 2022. The restoration of Canna House, its gardens and collections will underpin the economic sustainability of Canna by creating a compelling visitor destination for Gaelic heritage.

To date, emergency repairs to the house have made it wind and watertight. This included replacing windows, drainage works, asbestos management, timber treatments, and repairs to the chimneys. This initial phase was funded by National Trust for Scotland Foundation USA donors.

The next phase is the reinterpretation of the house and the collections. In time, the Trust hopes to restore the bunkhouse to provide accommodation for Gaelic scholars and visitors, as well as develop new interpretation in the garden.

Once restrictions are lifted, the Trust will begin internal infrastructure works on the house, starting by moving and storing the collections elsewhere to protect them in the appropriate museum standards. Internal decoration of the ceilings, billiard room, and bathroom will be completed before returning and reinterpreting the collection in the house.

The house and immediate garden are priority developments over the next 2-3 years. The cultural and visitor focus will underpin the island’s economy. The Trust will bring Canna’s garden back to life, connecting it with the collection indoors and creating a learning and wellbeing resource for both the community and visitors. The interiors of the house and the reinstatement and reinterpretation of John and Margaret’s collections will be carried out following completion of works on the house.

Objects in the archives at Canna House.

News from the Harbormaster

Canna is normally busy this time of year as it gears up for the tourist season. Thousands of visitors are expected over the spring and summer months. In his article published on the Trust’s website, Isle of Canna – a view from the harbor, Donald Mackenzie, the Trust’s harbormaster for Canna, gives a first hand account into what the lockdown is like for him and his fellow islanders, of which there are 16. As Donald puts it: “Our daily lives are not governed by the normal days of the week, but rather whether it’s a ‘ferry’ day or not.”

The Canna Harbormaster at work.

Songs from the Canna Archive

Canna House archivist Fiona Mackenzie has created a video that compiles some of the original audio recordings of a series of Gaelic songs collected by John and Margaret. Their book, Highland Songs of the Forty-Five, published in 1933, brought together songs inspired by the events leading up to the Battle of Culloden, which on Thursday, April 16, saw its 274th anniversary. Some of these songs had not previously been written down, and the storytelling and sound of the songs are captured in perpetuity. This is a demonstration of just some of the treasures that Trust looks forward to sharing with visitors in the future. View the full article and video here.

In early May, Fiona recorded a virtual walk around the Canna House garden – you can almost smell the wild garlic! The stroll is enhanced with some visual memories of the garden, taken from the Canna photographic collections. View the video at the bottom of this article.

How You Can Help

Americans can play a critical role to ensure the future of Scotland’s past during this uncertain time. The best way to protect Scotland’s places is by making a tax-deductible donation to NTSUSA. Your donation can be restricted to your favorite property – like Canna! – or directed to wherever the Trust needs it most.

A Virtual Stroll through the Canna House Gardens in Spring 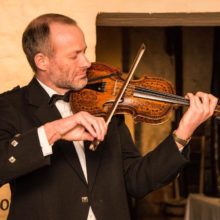 An historic violin with links to Robert Burns is being taken on a tour of the US in [...]