Over the course of 10 days in June 2014, 150 cast and crew members from the hit TV show Outlander set up camp at the NTS Property Preston Mill and Phantassie Doocot, to film some of the first season’s most pivotal scenes.

In this special post, we give our readers an exclusive behind the scenes glimpse of what happened when Outlander met Preston Mill…

Before the cameras were rolling…

Several aspects of the Preston Mill property had to be altered to make it aesthetically suitable as the backdrop to fit author Diana Gabaldon’s plot. For example, in order to convincingly transform the Mill into part of the 18th-century Lallybroch estate, some structural site changes took place – namely, removing all signs of 21st -century life – including modern fencing, signage, and even gates! Several trees and bushes were then drafted on-site and tactically positioned around the Mill, in order to conceal the nearby urbanized road and houses.

Authenticity and Setting the Scene

Conversely, some 18th -century implements were added to the set by the film crew, including the construction of an animal pen. During Preston Mill’s operational period, it has been said that its miller kept 3 pigs. The producers certainly did their research! To continue to boost authenticity and set the scene, burlap sacks were piled high, and a wooden cart was also added.

The crew then undertook a little horticultural work and kindly trimmed the nettles surrounding the mill pond so that the unclothed Jamie wouldn’t get stung on his way in and out of the water! 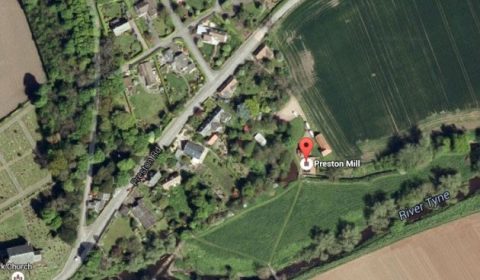 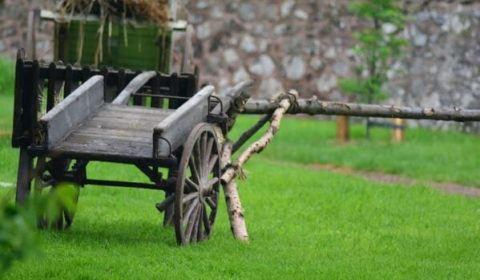 Some of the historic props drafted in to set the scene. Image via: Pinterest

As one of the well-placed final touches, set designers covered the interior of the Mill with flour to make it appear like just another day-in-the-life at an authentic working mill. In reality, Preston Mill stopped its commercial activity back in 1959.

Undoubtedly one of the most demanding physical changes on set involved artificially raising the water table on the mill race (pond) – from 12-18 inches to 5 feet – in order that it be deep enough for the heroic Jamie to plunge into. This task was skillfully achieved through a combination of man-made dams and controlled flooding. Luckily for actor Sam Heughan, the filming took place in June – however, as we Scots know all too well, it can’t have been easy to act out a whole scene in what would have still been close to freezing water!!

After a few labor intensive days of set dressing, the Mill was ready for its close-up…but not without an inevitable hitch seconds before the cameras started rolling… 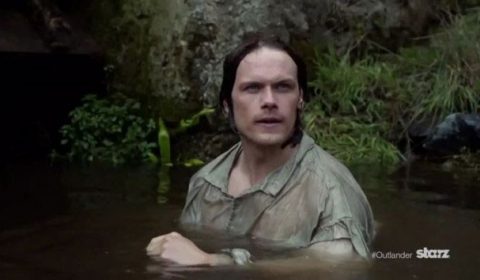 Jamie in the freezing mill pond – rather him than us! Image via Outlander Online 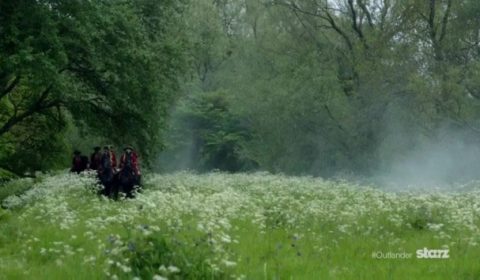 The Redcoats approach on horseback. Image via: Outlander Online

Once Jamie had jumped into the water, the director gave the command for the English Army to gallop onto the set for the episode’s critical ambush scene. However, this turned out to pose a somewhat unforeseen problem – many of the actors had never even ridden a horse before! Needless to say, the filming was halted; a period of intensive riding lessons ensued for the Redcoats to get up to standard before filming could resume! Eventually, after much practice, a few of the Redcoats managed to approach the mill at a respectable ‘trot’! Through the magic of film, canny directing, and unbeknownst to the viewers at home, the horses’ grooms were positioned just out of sight, ready to rush in and help many of actors halt their horses when the camera wasn’t looking! 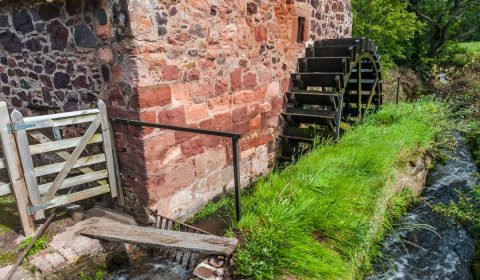 Close up of the gears of the Mill. Image © David Ross Photography

They say “beauty is pain”…and well, for the sake of art and capturing this next shot, it would appear that all notions of health and safety were cast aside to shoot the brave young Jamie inside the workings of the Mill, attempting to repair the damage using a hammer. For this shot, the cameraman was wedged into a tight space between the fanner and the gears, with his head just a few inches away from the moving parts of machinery! The situation could have potentially become disastrous, but thankfully the experienced crew member held steady and emerged without a scratch, while the director was able to shout, “that’s a wrap”!

During the filming period, the property was closed to the general public, but with the production complete, Preston Mill’s dedicated conservation team set about restoring the site back to its original appearance. Wheel blades were replaced, the flooded mill pond was drained, and all gates, signs, and fences were carefully put back in place in preparation for everyday visitors and NTS members to once more enjoy Preston Mill and Phantassie Doocot!

During the re-setting of the property, the NTS conservation team decided that the flour, which had been tactfully dusted around the interior of the Mill, provided a nice addition to the authenticity of the room’s original purpose. As such, they decided to leave the set designer’s work alone, in the hope that its presence would help visitors to envisage the now unused mill back in its working days. Although a great visual addition to the story, before long the flour turned black and mouldy, attracting some very unwelcome visitors – not Redcoats this time, but rats! The flour swiftly becoming cement-like in its consistency; luckily, the conservation team at the property were able to expertly remove all traces of the flour without damaging any of the Mill’s original 17th-century materials. 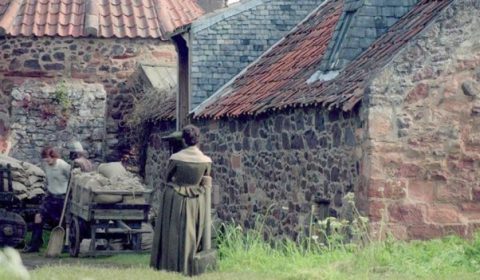 Jamie and Claire visit Preston Mill whilst at Lallybroch. Image via: Blogspot 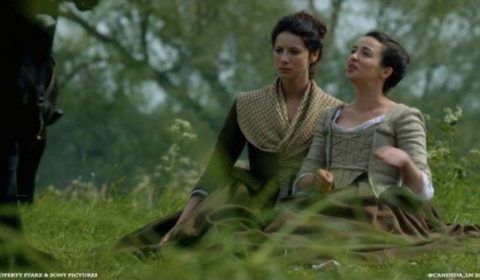 In April 2015, the scenes filmed at Preston Mill appeared on screens across the world, and visitor numbers subsequently soared! Fans from around the world began flocking to the NTS property to see where the famous mill pond scene was filmed. This special NTS property is still experiencing a surge in visitor numbers and enjoying the international attention that the TV show has propelled. 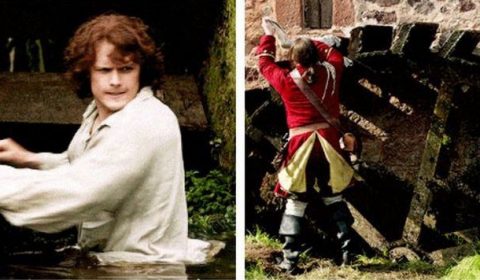 On-screen repairs being made by Jamie and a helpful Redcoat. Image via: Pinterest

Preston Mill is listed as one of the NTSUSA’s Priority Projects 2015-2016. On screen, Jamie – with the aid of an ex-miller Redcoat – was able to fix the Mill. Sadly this was only fictional; in reality the Mill is in need of essential repairs!

Funds are currently sought to make urgent repairs to the weir – the apparatus which controls the flow of water to the Mill. Left in its present poor operating condition, the continual breach of water will be detrimental to the functioning of the Mill, causing erosion to its base, many 17th century building materials, and the river bank itself. But with your help…we can turn this situation around.

To preserve this special NTS property and maintain its high-quality visitor experience for travelers all over the world – both today and for the future, we must act now! Consider donating to this property today, and help us to spread this important message by sharing this blog with your friends. Making a tax-deductible gift has never been easier – simply visit our secure donations page.

If you enjoyed this post, don’t miss our first dedicated Outlander post “A Phantassie setting: Preston Mill and its Outlander fame“.

A Phantassie setting: Preston Mill and its Outlander fame

Preston Mill and its Outlander fame