The Lorimer family is usually remembered for its lineage of successful male artists: Robert, John Henry and Hew. It’s time the multi-talented Hannah is equally celebrated for her art.

The walled garden at Kellie Castle

Kellie Castle in Fife was the home of the prolific Lorimer family, whose members included a university professor, an architect, a painter and a sculptor. They’ve been likened to a Renaissance dynasty because of the breadth of their talents. Hannah Lorimer (1854–1947) was their daughter, sister and aunt, and an accomplished artist in her own right. But, as is the case with many women in history, her story is often only told in the context of the men around her. She’s more commonly known as Lady Hannah Cassels im Thurn, the wife of Sir Everard im Thurn, governor of Fiji.

A copy of Henry Raeburn’s portrait of Thomas Reid, by Hannah Lorimer. The original of this painting can be seen at Fyvie Castle.

Hannah was born and raised in Edinburgh and received a Certificate in Art for Women: Moral Philosophy and Geology from the University of Edinburgh at a time before women could graduate with degrees. She also studied in Paris for several years. When Hannah was a young woman, the Lorimer family rented and renovated Kellie Castle, and this is where she found inspiration for her art. Hannah had a close relationship with her brother John Henry, who painted her on several occasions. Hannah and John Henry practised painting techniques by copying famous masters’ paintings, such as this Raeburn portrait in the castle collection. John Henry became a well-known artist, although Hannah exhibited work at the Royal Scottish Academy before he did.

While at Kellie, Hannah created music, embroidery, painting and sculpture. She also taught art for a time, and ran a postal art course throughout Europe, using the local Pittenweem post office.

It seems Hannah also had a connection with a few other National Trust for Scotland places. Ever curious and seeking new challenges, she learned the skill of moulding plaster ceilings during renovations at Kellie Castle. She was then entrusted with completing the plaster ceilings at Falkland Palace during the extensive restoration project for the Marquess of Bute. Additionally, Project Reveal discovered a series of sketches by Hannah depicting another property – Culross Palace – which were hidden away in storage.

Sketches from Culross Palace by Hannah Lorimer – her sketchbook can be seen on display at Kellie Castle.

Hannah married the explorer and colonial administrator Sir Everard im Thurn in 1895 at the age of 40, and subsequently travelled with him to various countries including British Guiana (now Guyana), Fiji and Ceylon (now Sri Lanka). One of Everard’s expeditions is said to have inspired Sir Arthur Conan Doyle’s novel The Lost World (1912).

Although she was never considered a professional artist, Hannah continued to create art throughout her travels. Everard was an avid photographer and botanist, and Hannah painted the species of orchids that he studied. A collection of these watercolours resides at the Royal Botanic Gardens in Kew. Hannah also sculpted busts of the people she met. Kellie Castle holds a plaster cast for one of these sculptures, which can be found in collections around the world.

Despite all her travels, Hannah never lost her Scottish roots and the couple returned in 1920, spending the rest of their lives in East Lothian. To see more of Hannah’s art, including sketches of her family and early reproductions of paintings by Sandro Botticelli and Henry Raeburn, pay a visit to Kellie Castle. There you can also see a mural by Phoebe Anna Traquair, one of Scotland’s most celebrated artists and a friend of the Lorimer family.

A painting of Hannah Lorimer embroidering a bed cover, by her brother John Henry Lorimer, c1885

This article is by Michelle Atherton of the Project Reveal Team. Project Reveal is a multi-site digitization project of unprecedented scale. It will result in an updated database with high quality images and unique object numbers for every item in the Trust material culture collections. With your support, we can help the Trust manage its collections more effectively. Most important, we can help the Trust discover, better understand, and share its treasures with the world. 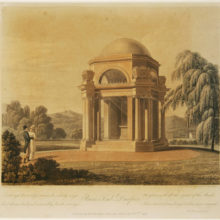 Secrets of a Shrine (Part I)