Following in the Footsteps of Freedom

At the National Trust for Scotland Foundation USA we are constantly inspired by the (sometimes surprising) connections between Scotland and America. With Independence Day upon us, we thought it was the perfect time to explore an interesting theory which suggests a connection between Scotland’s declaration of independence and our own. Some people believe when the American colonists cut ties with the British and formed the United States of America, they were inspired by their Scottish colleagues, friends, and neighbors who had immigrated to the colonies.

Historian Linda MacDonald-Lewis, writes that it was Scotland’s 1320 Declaration of Arbroath – rather than ancient Greek ideals of democracy or the Magna Carta – that inspired the 1776 American Declaration of Independence.

The Declaration of Arbroath is Scotland’s declaration of independence, written in 1320 in the Arbroath Abbey, as a letter to Pope John XXII with the intention to solidify Scotland’s status as an independent sovereign state from England and is undoubtedly Scotland’s most famous document in all of history.

“It is in truth not for glory, nor riches, nor honors that we are fighting, but for freedom – for that alone, which no honest man gives up but with life itself.”

-an extract from the Declaration of Arbroath, 1320

Statue of Robert the Bruce at Bannockburn, Scotland

After Robert the Bruce seized the throne in 1306, he began the struggle to secure himself and Scotland against many threats. When he succeeded at the Battle of Bannockburn in 1314, defeating Edward II’s army, this was a huge step forward for Scotland. Yet England still did not recognize Scotland’s independence nor Bruce’s position on the throne. The Declaration of Arbroath was later written on behalf of the whole country asking the Pope to acknowledge Scotland’s independence and Robert the Bruce as their rightful King.

The day the Declaration of Arbroath was drafted, April 6, is known as Tartan Day and celebrated each year across the U.S. Many cities extend this celebration over the full week, most famously in New York City.

Next year marks a special anniversary for the Scottish-American relationship and Tartan Week as we celebrate 700 years since the Declaration of Arbroath was signed. The influence of Scotland’s independence on Jefferson when he created the American Declaration of Independence is set to be a major theme in next year’s events.

And if you’re planning a trip to Scotland, you can learn more about Robert the Bruce and his fight for independence at Bannockburn where you can stand shoulder to shoulder with the King of Scots on the site of his most famous victory. In our memorial park, follow in the footsteps of the King and see exactly where he raised the royal standard before winning Scotland’s independence. Inside, dive into an immersive 3D experience where you will feel like you have travelled back in time to the 14th Century, interacting with warriors and knights right in the midst of the famous conflict.

‘Warriors and Wordsmiths of Freedom: The Birth and Growth of Democracy’ by Linda MacDonald-Lewis 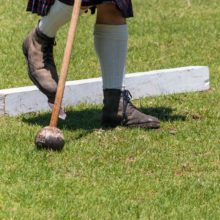 From tossing the caber to dancing and bagpipes, the Highland Games are an event to be [...]