Brodick’s Walled Garden: Visions of the Past and Future

Our Saltire Scholar Tierney takes a tour around the Walled Garden at Brodick Castle, led by NTS Garden Manager Tim Keyworth, as they discuss Tim’s vision for the future of the gardens.

As a young professional from the center of Glasgow, I’d had little exposure to the wonders of horticulture and quite honestly had very little interest in the topic. Luckily, my meeting with Tim and his passion for the work they do at Brodick was about to change that!

Tim has been managing a skeleton crew across Brodick’s 74 acres of gardens since the pandemic hit, but you wouldn’t know by looking at it. We stand on the pathway above the Walled Garden, looking down across the immaculately manicured lawns and bright floral bursts that pop against the backdrop of Brodick Bay, and Tim begins to talk me through the past, present, and future of the space.

View of the Walled Garden and Brodick Bay

I learn that it’s incredibly rare to find an original walled garden so close to the house, as the trend around the era of Princess Marie of Baden’s time at the castle was to rebuild further away from the property itself, as we see at Culzean Castle.  Princess Marie took an active role in evolving the design of the home and gardens following her marriage to William Alexander, 11th Duke of Hamilton, in 1843, and fortunately for us she decided to retain the original garden and commission the building of an additional one, which is now used as a workspace for the gardeners.

The trick with this garden will be marrying the two “original” conceptions – the traditional walled garden experience and the Victorian pleasure garden it was converted to at Princess Marie’s request – with modern functionality and visitor expectations. Tim’s vision for the gardens at the property is to highlight and respect their heritage, including the stories behind each plant and flower, and increase accessibility for visitors.

A tree fern, once used as ballast on ships

Tim talks me through the plants’ background and how they came to be in the garden today. Once used as ballast on ships traveling from Australia and New Zealand and subsequently tossed overboard when no longer functional, I’m shown a tree that managed to seed itself in the country, and both survive and thrive here.

Tim points to another very unusual plant, which blooms only every nine years before dying off. It was planted by one of their longest-serving volunteers, who is now 80 years old, and jokes that she may not be alive to see the next bloom (a very Scottish sense of humor!) I also learn a little about “plant hunters,” who were employed by wealthy families to travel abroad and return with exotic seeds – I liken them to the Indiana Jones-es of the plant world!

Looking to the future, Tim wants to continue introducing elements from the garden’s past to deepen the visitor experience and preserve its history. One such initiative is his plan to reintroduce fruit trees to the landscape. Tim’s “step-over apples” will not only provide more color and texture to the garden, but the fruit can also be used in the Castle’s café – the idea of a historical apple pie has my mouth watering!

I’m shown where Tim hopes to relocate the summerhouse, at the bottom corner of the garden, allowing for an impressive view of the castle framed by the vibrant plant life. This move will also permit the reopening of a disused archway behind the summerhouse’s current location, which will open up the space for wheelchair access.

The sundial space, described by Tim as "the heart of the garden". Sadly missing its dial!

We reach the sundial space in the heart of the garden, which was used as a wedding venue just days before. Tim imagines this as a community space and hopes to install custom seating around the circumference so visitors can sit amongst the flowers. Unfortunately, we discover that the listed sundial was damaged the day previously, highlighting the ongoing maintenance needed to preserve the Trust’s treasures as well as the difficult decisions involved in conservation work. The team at Brodick must now decide whether the sundial can be salvaged or if it requires recasting from scratch.

The capping along the top of the wall at the bottom end of the garden is also in need of extra care, as it helps to maintain the unique microclimate in the garden that allows exotic species to flourish where they couldn’t elsewhere in the country. The wall itself dates to 1710, so wear and tear is inevitable, but Tim tells me that the damaged capping has affected the temperature in the garden by as much as 41 degrees Fahrenheit, putting the plant’s lives in real danger.

Damaged capping visible atop the original wall from 1710

I come away from my meeting with Tim filled with awe at the scale of what he and his wee team have achieved, but also apprehensive about the security of the garden’s future. It’s heartening to know that there is a community of individuals across the ocean who help support the conservation of Scottish heritage gardens like the one at Brodick. If you would like to make a donation restricted to the Brodick Gardens, or any other Trust property, please follow the link the below. 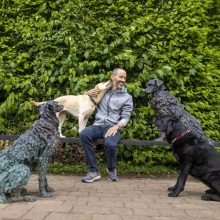 The “Bark” of Ayrshire Immortalized in Bronze

Canine celebrities Olive and Mabel joined their owner Andrew Cotter at the Poet’s [...]