Noble Caledonia are offering a unique cruise around the Inner and Outer Hebrides of Scotland, exclusively designed for us to celebrate Scotland and the special places in our care.

Noble Caledonia introduced small ship cruising, often referred to as expedition cruising, to Scotland almost 30 years ago, and it soon became one of the most important areas for their fleet of small ships. The geography of Scotland lends itself well to exploration by sea, perfect for their small ships that carry between 70–100 passengers. Take a look at the itinerary for Hebridean Heaven if you have a hankering to see and learn more about the natural world, history and culture of the Hebrides. It promises to be an enchanting journey with like-minded travelers.

Hebridean Heaven is not a ‘traditional’ cruise but a thought-provoking journey, at the time of year when the islands and west coast of Scotland will be at their best. The wildlife, gardens and wild flowers will be at their richest, thriving in some amazing habitats. There will be many highlights along the way but perhaps none more so than the visit to the St Kilda archipelago, an extraordinary place that has earned a dual designation as a World Heritage Site for both its natural and cultural significance.

Traveling with us will be a team of naturalists and experts who’ll add much to your enjoyment and knowledge in such diverse places as Glencoe, Inverewe, Crarae Garden, Fingal’s Cave on Staffa and the holy island of Iona.

We’re delighted that John Love will be part of the team again. In 1975 John went to live on the Isle of Rum where he successfully managed a project to reintroduce the sea eagle. While he remains involved with birds of prey, seabirds are another passion. In the 1990s John acted as guide and lecturer on several small charter vessels around the Hebrides and he has lectured on cruises around Scotland and to Norway for the National Trust for Scotland. He first worked for Noble Caledonia in 2009 and now participates in various expedition cruises for 3–5 months each year, mainly around the UK – and the Hebrides in particular.

Gannets at the steep cliffs of St Kilda

Embark MS Serenissima this afternoon. A transfer will be available from Glasgow Central Station and Glasgow International Airport at a fixed time. Enjoy welcome drinks and dinner on board as you sail along Loch Linnhe and anchor overnight at Fort William.

Awake this morning in Fort William, the largest town in the Scottish Highlands and a great base to explore the surrounding beautiful scenery of the Nevis Range. On a morning tour, you’ll drive to two of the best-known monuments in Scotland: the statue to commemorate Bonnie Prince Charlie and the failed Jacobite rising of 1745, and the Glenfinnan Viaduct. Having enjoyed stunning views of Ben Nevis on the way, you’ll explore the National Trust for Scotland’s Glenfinnan Visitor Centre and then watch the famous Jacobite steam train chug across the famous landmark.

After returning to Fort William for lunch, you’ll travel south along the shores of Loch Linnhe to visit Glencoe, one of Scotland’s most spectacular places and now in the care of the National Trust for Scotland. The glen provides some of Scotland’s most dramatic scenery and is also the site of the infamous 1692 massacre. The scenic drive continues via the Pass of Brander, taking in the impressive landscapes of the Scottish Highlands – mountains, sea lochs, castles and islands – before travelling back up the west coast to Fort William and returning to the ship.

Strategically placed between the mountains of Rum and the Outer Hebrides, the island of Canna and its adjoining neighbor Sanday have an amazingly rich archaeological landscape, with remains dating from all periods of settled occupation in Scotland. Canna is looked after by the National Trust for Scotland and enjoys the best harbour in the Small Isles. The fertile soil and diversity of habitats mean that the island has an incredibly rich plant life, with 248 native flowering plants recorded. You’ll see Canna House and wander across grassy plateaus to the 600-feet cliffs in the north of the island.

You’ll then sail during lunch to lovely Loch Scavaig on the island of Skye. Just beyond is the freshwater Loch Coruisk with breathtakingly beautiful views over the Cuillins. This is great walking country, but for those who prefer a less energetic afternoon our Zodiacs will explore the coastline looking out for seals.

Day 4: Inverewe and the Shiant Islands

This morning you’ll visit Inverewe, surely one of the finest sited gardens in all Scotland. Cared for by the National Trust for Scotland since 1952, it was first designed by plant hunter Osgood Mackenzie in the late 19th century and is home to a multitude of exotic and tender plants. They thrive in this northerly location, warmed by the effects of the Gulf Stream and protected by over 40 hectares of woodland shelter. After a guided tour of the gardens, you’ll return to the ship and sail over lunch.

In the afternoon you’ll board the Zodiacs for a cruise around the spectacular basalt cliffs of the Shiant Islands, a group of little islands located a few miles off Lewis. This is an excellent place to spot puffins, razorbills, guillemots, seals and hopefully white-tailed eagles.

Awake this morning in St Kilda, a remarkable uninhabited archipelago some 40 miles beyond the Outer Hebrides. Dominated by the highest cliffs and sea stacks in Britain, Hirta (St Kilda’s main island) was occupied on and off for at least 2,000 years, with the last 36 islanders evacuated at their own request in 1930. Immediately after the evacuation, the islands were bought by the Marquess of Bute to protect the thousands of seabirds including puffins and fulmars, and in 1957 the islands were bequeathed to the National Trust for Scotland.

St Kilda is one of the few UNESCO World Heritage Sites with dual status, reflecting both its natural and cultural significance. The National Trust for Scotland ranger will join you on board before the expedition staff lead a number of guided walks on Hirta. Later, you’ll cruise past two of the largest gannetries in the world at Stac Lee and Berneray. These impressive stacs rise 170m from the sea and are home to up to 60,000 breeding pairs of northern gannets.

Arrive over breakfast at Mingulay, the largest of the group of islands south of Barra. Its towering cliffs and stacks face the Atlantic while the east side slopes gradually down to the sandy beach of Mingulay Bay. Despite there being a continuous population on the island for at least 2,000 years, evacuation began in 1907 and the island was completely abandoned in 1912. Ruins of the village remain close to the shore which you’ll explore on a guided walk. The island, now cared for by the National Trust for Scotland, also has important breeding populations of razorbills, guillemots, puffins, fulmars and shags.

Over lunch you’ll sail to Barra, which is near the southern tip of the Outer Hebrides, to visit Castlebay which curves around the barren rocky hills of a beautiful wide bay. Here we find the 15th-century Kisimul Castle, seat of the Clan Macneil and a key defensive stronghold situated on a rock in the middle of the bay.

Over breakfast the ship will hopefully drop anchor off the south of Staffa, which has been in the care of the National Trust for Scotland since 1986. Here, the perpendicular rock face features an imposing series of basalt columns, known as the colonnade, which has been cut by the sea into cathedralesque caverns, most notably Fingal’s Cave. Weather permitting, you’ll use the Zodiacs to explore closer before sailing to Iona, also in the Trust’s care.

This flat Hebridean island has been occupied for thousands of years and has been a place of pilgrimage and Christian worship for several centuries. St Columba fled from Ireland in AD 563 and established a monastery here; his followers were responsible for the conversion of much of pagan Scotland and northern England. Many early Scottish kings are buried in the abbey. Visit the abbey or enjoy a walk along the white sandy beaches.

Northwest of Staffa lie the Treshnish Isles, an archipelago of uninhabited volcanic islets, of which the island of Lunga is the largest. Lunga has been described as ‘a green jewel in a peacock sea’ and is a summer nesting-place for hundreds of seabirds.

The Benedictine abbey on Iona

You’ll sail this morning along the Argyll coast to the anchorage at Ardfern. From here you’ll visit two very special National Trust for Scotland gardens. First stop is Arduaine, a delightful woodland garden on a rocky promontory beside the sea which enjoys the benefits from the warming effect of the North Atlantic Drift and is a paradise for plant lovers. Here you’ll see the magnificent collection of rhododendron species as well as azaleas, magnolias and many other shrubs and trees creating scents and splashes of colour throughout. Take a walk through the woodland to the coastal viewpoint and enjoy superb views of the Sound of Jura, or just spend some time relaxing at the water garden.

Return to the ship for lunch and then drive to Crarae Garden, a Himalayan-style glen set in the gentle hills of Argyll. The garden was created in 1912 by Lady Grace Campbell, the aunt of intrepid plant hunter Reginald Farrer, who sourced trees and shrubs from China, Nepal and Tibet. Today, the sparkling waters of the Crarae Burn form the centrepiece for a woody paradise of rocky gorges, wooden bridges and thickets of maple, birch and evergreens, blending with sprays of flowers.

Disembark this morning after breakfast. Transfers will be provided to Glasgow International Airport and Glasgow Central Station at a fixed time.

Noble Caledonia will make a contribution to support the vital work of the National Trust for Scotland, much of which will be enjoyed during this voyage. 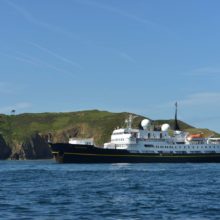 Join us on a unique cruise around the Northern and Western Isles of Scotland, [...]